Lebanese protesters are enraged by official negligence blamed for the deadly Beirut blast and have vowed to rally again after a night of street clashes in which they stormed several ministries.

“Prepare the gallows because our anger doesn’t end in one day,” warned one message circulating on social media in response to the explosion.

The calls for new protests came as French President Macron was to oversee a UN-backed virtual donors conference to raise aid for Lebanon, a country already mired in a painful economic crisis.

In Beirut, the fury in the streets has further shaken the embattled government of Prime Minister Hassan Diab, which has seen the information minister, Manal Abdel Samad quit.

“After the enormous Beirut catastrophe, I announce my resignation from government,” she said, apologising to citizens for having failed them.

The news that Lebanese state officials had long allowed the storage of the pile of ammonium nitrate in the heart of the capital has served as proof to many Lebanese of the rot at the core of the state apparatus.

The death toll from the deadly blast has killed at least 158 people, with 60 still reported missing, 6000 wounded and over 250,000 displaced. The blast has left a 43-metre deep crater at Beirut’s port.

A day after the deadly blast, thousands demonstrated in the biggest anti-government rally the country has seen in months. 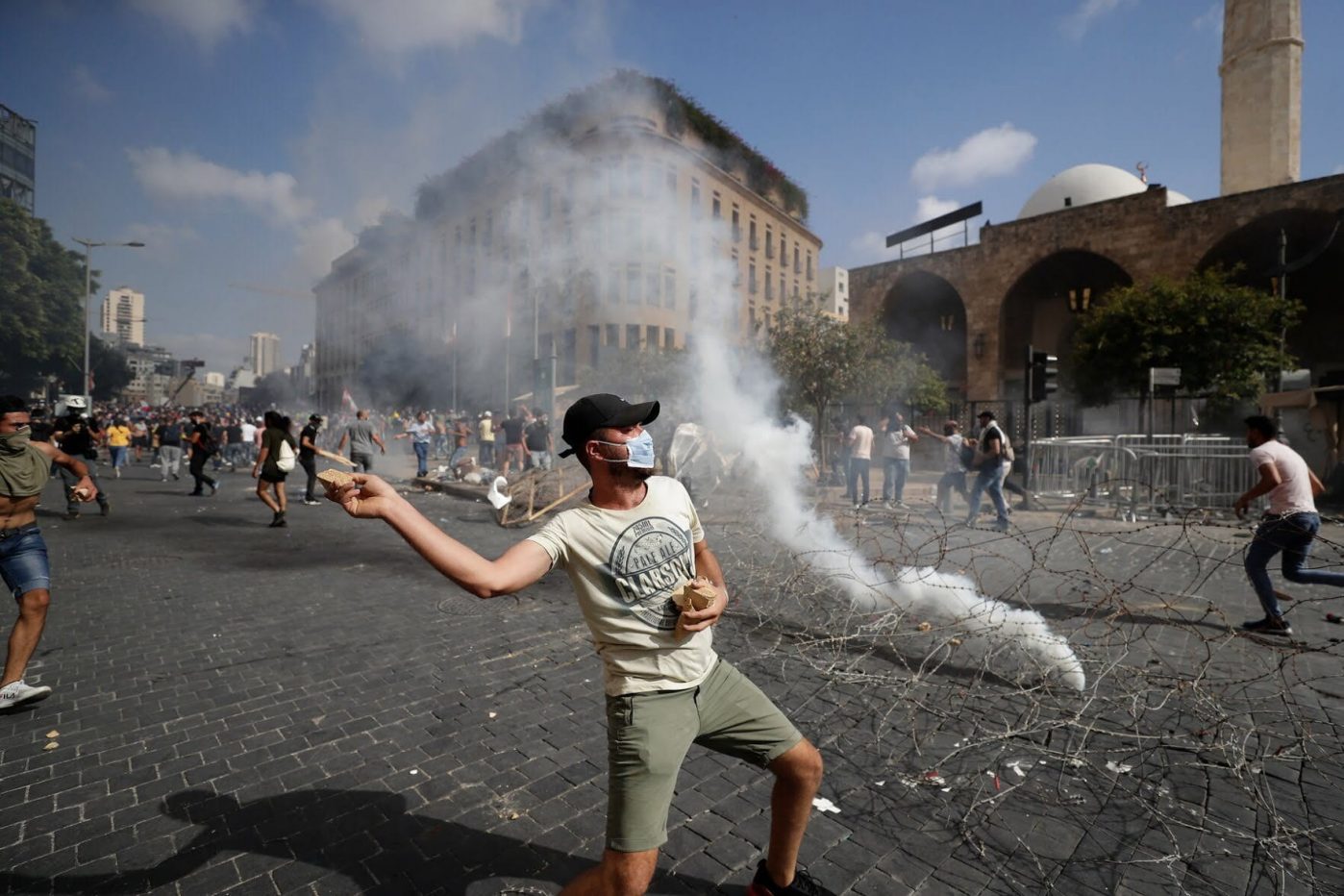 The country’s worst peace-time disaster has reignited a protest movement against the ruling elite that first started in October but had faded amid economic hardship and the coronavirus pandemic.

As tensions again escalate, on Saturday the army used teargas and rubber bullets to clear hundreds of protesters from the central Martyr’s Square – the epicentre of Lebanon’s protest movement.

The violence left 65 people injured, according to the Red Cross, with footage circulating online showing some demonstrators having sustained severe injuries.

Demonstrators had temporarily occupied the foreign ministry building before being forced out by the army three hours later.

Protesters stormed the economy and energy ministries and the Association of Banks – widely loathed for cash shortages and asset freezes – before they were forced back by soldiers.

why are news channels only talking about the protests and riots in lebanon and not the people who cleared the streets on their own because their government is too corrupt to help them? a reminder NOT to sign petitions and only donate to independent organisations/NGOs💛 pic.twitter.com/LQxrOinApI

Prime Minister Diab said Saturday he would propose early elections to break the impasse that is pushing Lebanon into a deeper political and economic crisis.

“We can’t exit the country’s structural crisis without holding early parliamentary elections,” he said in a televised address, promising a draft bill Monday.

At least six lawmakers have also quit since the Beirut explosion.

The head of Lebanon’s Maronite church patriarch Beshara Rai joined calls urging Diab’s entire cabinet to quit over the blast that he said could be “described as a crime against humanity.”

The protesters are calling for a removal of Lebanon’s ruling class, which they see as living in luxury while millions are enduring job losses, deepening poverty, power blackouts and garbage mountains forming on the streets.

A group of retired army leaders – whose state pensions have been decimated by the collapse of Lebanon’s currency – have joined the young in protesting.

Politics in Lebanon is dominated by former warlords from the 1975-1990 civil war or by their offspring and nephews.