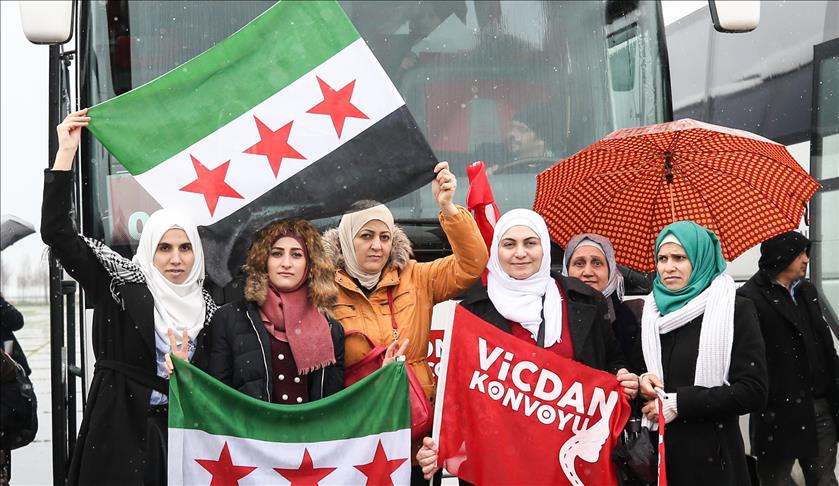 For International Women’s Day, we celebrate the Convoy of Conscience – lead by our own Yvonne Ridley and thousands of courageous woman who have parked themselves on the Syrian border, determined, defiant and resolute.

As avid followers of WTX News already know, I’m heading off for the Syrian Border this week with a bunch of remarkable women from more than 55 different countries on what has become known as the Conscience Convoy. I will be giving regular updates on our progress and no doubt filling you in on my travelling companions.

I was quite torn today as the main group in the convoy headed off towards Adana while a few of us remained to go to the presidential palace to meet Turkey’s leader Recep Tayyip Erdoğan and his First Lady Ermine.

You can see from the images taken by those in the convoy that magnificent reception and rallies that were held as our all-women movement gained fame and momentum across Turkey and aroused considerable media interest elsewhere in the world.

Just a few weeks ago the idea of the convoy was being mooted by some Turkish NGOs in response to growing horror stories about the women trapped inside Syria’s prisons who wanted to shine a light on this dark corner of the very dark Assad regime.

Today I sat and listened as a Syrian mother-of-three gave testimony about how she had been arrested, along with her three children, and put inside one of Assad’s prisons. beaten and humiliated infant of her husband – also a prisoner – she talked about the brutality she endured.

Stay tuned for more updates from the ground near the Syrian border by WTX News special Correspondent Yvonne Ridley.

A personal Video message from Yvonne

While the appalling plight of the residents fleeing the rebel-held Eastern Ghouta enclave in Syria worsens Syria’s brutal military backed up by Russian and Iranian forces has advanced on several fronts as they try to retake the besieged enclave just to the east of the capital, Damascus.

In the meantime the Conscience Convoy hopes to shine another light on another dark corner of the Assad regime and that involves thousands of women who are being held captive in the many prisons and dungeons around Syria. Harrowing tales of brutalisation, rape and torture are emerging and the purpose of the convoy is to try and persuade the regime to release those poor women and their children.

Obviously not everyone has the time to join us on the convoy but if you can’t please post messages on WTX News and other social networks to show your support. This is a woman-only venture but we need everyone’s help regardless of gender so please join in and cheer us on from the sidelines.

The Conscience Convoy will be made up of women from around the world; women of faith and no faith, political activists, professionals, NGOs, medics, housewives, businesswomen, teachers and politicians. All with one cause to end the persecution against women. Follow WTX News for the latest updates as the convoy heads to the Syrian border

The Weather will not stop us

Get on the right bus please

In the rain, against all odds, we will make a difference

Latest updates will appear on this page throughout the day. Stay up to date as we will also report via our Daily Diary Report.

A thank you gift for team, with hugs and kisses.

People like you make this possible, so please show your support and inspire our journalists.