Chateau Denmark review: A truly decadent stay that will make you feel like a rockstar

Quick Summary
'If anyone asks about where to stay in London, it’s now top of my list'. 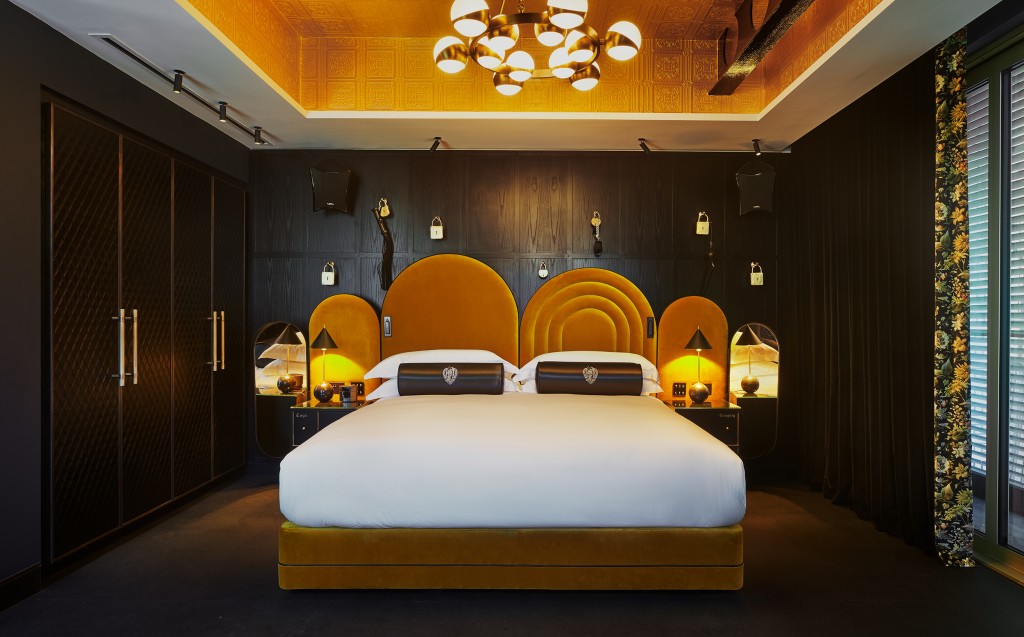 Can you spot the whips in the Deluxe Session Room? (Picture: Chateau Denmark)

‘Music is dead’. ‘Rock and Roll isn’t what it used to be’. These are the mutterings of many who have watched aghast as Tottenham Court Road has evolved over the years. Just off where huge glass caverns usher you into the bowels of the Tottenham Court Road Elizabeth line, lies Denmark Street, London’s Tin Pan Alley.

It’s the home of music, where near enough every great British musician there ever was came to put a marker in the sand with the likes of the Rolling Stones, Queen, and the Kinks making early recordings here. Paul Simon, Bob Marley, Stevie Wonder and Jimi Hendrix too. David Bowie even lived on the street in his converted ambulance, while The Sex Pistols lived and recorded at 6-7 Denmark Street.

So how could I turn down the opportunity to stay in the newly renovated Chateau Denmark, where Johnny Rotten scrawled in magic marker on the walls?

Forget a minibar, it’s all about the maxi (Picture: Chateau Denmark)

Positioned as honouring its heritage, where music thrived and the party never ends, the opulent hotel is now welcoming guests for an absolutely outrageous stay.

At a time when we’re all feeling the pinch and bracing ourselves for what might come, Chateau Denmark is an over-the-top, go-all-out destination. Upmarket hotels promise unique stays, but let’s face it these are often in rooms where if you looked in next door, it’s the same layout, same design. That’s fine, if that’s what you’re after but Chateau Denmark promises something entirely different for each of its rooms that are furnished with gold-trimmed, graffitied signature beds and full-blown psychedelia with bold colours and leaves you feeling like you’re in your own afterparty having just got off stage.

After almost being teleported through a digital canvas, you’re straight into a red zone where punk rock meets vintage gothic as neons glow in welcome at the reception desk. The team anticipated my arrival and I couldn’t quite work out if that was unnerving or really living up to its VIP promise, nevertheless I was already taking on my rockstar persona, even if I was shattered having run around after a toddler all day.

The Chateau had me at butler… (Picture: Claire Eaton-Rutter)

We were immediately introduced to our butler, Alberto. A butler! He would be taking care of our every need he insisted, as he took us up to our room. Each of the Session Rooms and Apartments bears its own song name like A Killer Queen and McCartney’s This Is Your Time.

We were shown into the Deluxe Session room, where padlocks and whips hang off the wall above the bed. Given a tour, we were also shown a balcony and assured that we could request anything from cigarettes to food from outside the hotel and he would sort it for us. I was in danger of getting used to the life already.

Now this is an entertainment space (Picture: Chateau Denmark)

The reeded glass, the emerald tiles and marble tiles are a winning combo for cool vibes (Picture: Chateau Denmark)

Let it be known, I never want to see a minibar ever again after being spoiled with a maxibar. Why go mini when you could go maxi? Not that I could afford those prices, which were listed out on the TV menu, where a bottle of Garrus Rose would set me back £400. I had anxiety thinking of that one lary friend that would get overexcited and open the wrong bottle. Yikes. And the lighting is super dark in there, so it could happen. Thankfully, there were other reasonable choices. Bottles upon bottles. It’s a party palace for absolutely raucous behaviour and devilishly decadent.

I’m going to confess, we did order in. Some cheap and cheerful offerings from Chinatown that were then plated by Alberto. What a guy. He also knocked us up a rather delicious gin and tonic with an Old Fashioned and also sourced some oat milk, delivering it in stealth that we didn’t even seem to notice. A magician.

Can we get this up at home please? (Picture: Claire Eaton-Rutter)

The breakfast vibe of dreams – not looking at the wine from the night before (Picture: Claire Eaton-Rutter)

Being old now (37, but who’s counting?) I was a little apprehensive about my night’s stay, perhaps I hadn’t quite got fully used to being a rockstar but would fellow guests be raving all night? Would I be that super grumpy spoilsport that ruined everyone’s fun with complaints? But that was not the vibe. We didn’t hear a thing thanks to the super soundproofing and I am still surprised about it because the sound system in the room was next level.

What to do in Nashville – for Swifties, partiers, and everyone else

A guide to Jamaica Carnival: The Caribbean’s best party is back

Our following morning was equally heaven-sent, with a new butler called Meg, who helped text us with our breakfast menu that she was going to grab from the nearby eatery The Black Penny. Did I feel treated or what? I debated saying not to worry but hey, I was still going to be a rockstar for a few hours more. The food was still piping hot and avoided the sogginess that comes with being a takeout and we enjoyed a reviving bite while wincing at the array of ‘the night before’ paraphernalia.

Overall, I adored the gothic drama of Chateau Denmark. If anyone asks me about where to stay in London, it’s now top of my list because it’s truly an absolutely outrageously opulent stay that does away with the genericness of other London hotels. Staying here is all about making you feel like a rockstar, and why would you want anything else? I was told they do nothing by half-measures, and they weren’t wrong.


MORE : Can you ever make a theme park trip luxury? We go to Fairmont Windsor Park to find out

‘If anyone asks about where to stay in London, it’s now top of my list’.