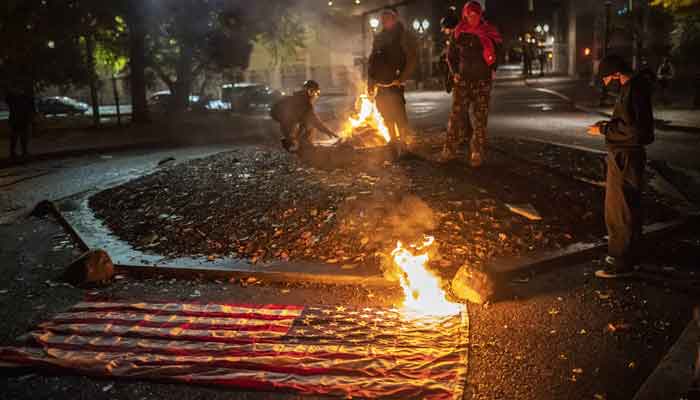 Tensions in Portland ran high after Election Riots erupted around the United States. On Wednesday with several protesters putting US flags on fire after Donald Trump claimed an early victory and made unfounded allegations of election fraud.

The liberal enclave in the state of Oregon had braced for possible armed clashes after months of divisive rallies involving left-wing activists, right-wing militias and federal officers deployed by the Trump administration.

As President Donald Trump claimed he won the US election early Wednesday, despite key states still counting ballots, activists gathered outside the Portland federal courthouse — the epicentre of the summer’s fraught anti-racism protests.

In the US election, voters decide state-level contests rather than an overall, single, national one.

This race is still too close to call. Donald Trump is projected to have won important states such as Florida, Ohio and Texas – but he will need to win several more key states to secure four more years. Biden still has several paths to victory, but none is guaranteed.

“We don’t like either candidate — I shamefully voted for Biden — but if Trump gets another four years people will be mad,” said one 20-year-old protester, who asked to be called “L,” as two American flags were ignited in front of the building in the US Election Riots.

Many at the courthouse shouted slogans against Trump as well as Portland Mayor Ted Wheeler, a bogeyman for anti-police protesters who won re-election Tuesday, while others danced and twerked to loud hip-hop music.

The FBI has warned of the potential for armed clashes in Portland linked to the polls, but there were no signs of election night activity from right-wing groups such as the Proud Boys.

And by the early hours of Wednesday police had not engaged with the protesters, some of whom earlier participated in a peaceful 400-strong Black Lives Matter march around east Portland.

The three-hour march was led by a convoy including at least half a dozen protesters armed with assault rifles, knives and a shotgun. Rumours and reports of shifts in the national and state races still being counted spread among marchers.

“I heard Trump has the momentum now,” said 20-year-old protest leader Ty Ford. “It’s gonna be a riot. Whenever it comes out, it´s gonna be crazy.”

“It is like picking between two evils but honestly, we’ll settle with Biden,” said the fellow leader “D.D.,” aged 22.

At least four people are dead — including a possible suspect slain by police — following shootings Tuesday in the Nevada city of Henderson, authorities said.

The police said, four people, died, including the possible suspect, and a fifth person was taken to a hospital, Kuzik said. The condition of that person wasn’t immediately known, according to the police captain.

Demands ranged from abolishing ICE (Immigration and Customs Enforcement) to justice for Black victims of police violence including George Floyd and Breonna Taylor before the march ended with a rendition of “Hallelujah.”

There were also moments of levity as protest leaders cajoled those watching the march from their apartment windows to join the rally.

“Hey, stick your head out the window, tell us how the election is going — and then maybe slip on your shoes and come help us start a revolution,” shouted one activist.

The US may be considered by many to be the world’s oldest democracy, but if the legitimacy of its electoral system is called into question, then that will add to doubts about representative government elsewhere in the world.

My Tweets
We use cookies to help identify your computer so we can tailor your user experience, track shopping basket contents and remember where you are in the order process. WTX News Our Cookie Policy
Daily News Briefing: MPs to vote on England’s Covid-19 one-month lockdown
The Good, The Bad & The Savage – Trump claims victory
To Top
Weekly