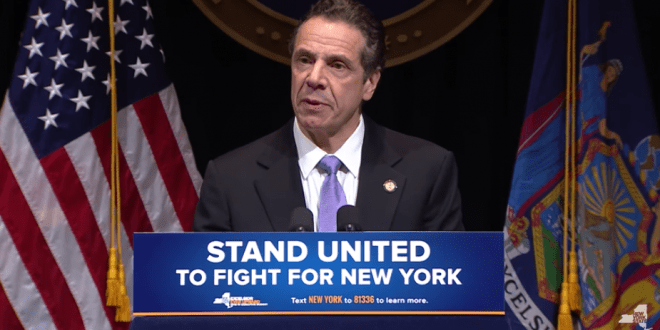 Andrew Cuomo on Monday ordered schools in certain New York City neighbourhoods closed within a day in an attempt to stop flare-ups of the coronavirus.

The governor took the action a day after the city’s major asked the state for permission to reinstate restrictions on schools and businesses in nine ZIP codes in Brooklyn and Queens where the virus was spreading more quickly than in other parts of the city.

Cuomo said the closures would take place by Tuesday.

“These clusters have to be attacked,” Cuomo said, likening the state to a field of dry grass ready to ignite if burning embers aren’t put out fast.

Democrat Cuomo said schools in those areas hadn’t been testing students for the virus to identify outbreaks and he could no longer guarantee they were safe. He said he hadn’t made a decision yet on whether to also close certain businesses.

City leaders and the head of the city’s teachers union had agreed to the plan during a phone call shortly before the news conference, Cuomo said.

The mayor’s plan, which required state approval, would close about 100 public schools and 200 private schools including religious schools.

Speaking at a separate event, the city’s mayor said, “We’re going to work hard to turn around those nine ZIP codes so that in the coming weeks kids will be able to come back to school.”

Most of the neighbourhoods targetted by restrictions are home to part of the city’s large Orthodox Jewish community -where many religious schools resumed in early September and where large religious gatherings have continued to occur, despite the rules.

The governor warned that he will shut down temples and churches, too, if compliance with social distancing doesn’t improve.

“If you do not agree to follow the rules, then we will close the institutions down. I am prepared to do that,” Cuomo said.

The virus in New York City continues to spread at fairly low levels compared to much of the rest of the country, only a handful of areas in Brooklyn and Queens have seen infectious rates rising.

The nine ZIP codes singled out for the restrictions have been responsible for more than 20% of all new infections in NYC over the past 4 weeks, though they only represent 7% of the population.

Mayor De Blasio’s plan would shut nonessential businesses and force restaurants to offer takeout, just a week after they were allowed to begin welcoming diners back indoors.

Governor Cuomo said he wanted more information before ruling on that request. And he also said that targeting hotspots by ZIP codes was clumsy because the borders often didn’t align with where the problems were occurring.

At the event, de Blasio said the city was continuing to work with the state and was waiting to hear about any changes the state wanted to make.

“We’re going to be ready to move as early as Wednesday morning,” he said. “If the state comes back with modification, we will of course follow that modification. I do not expect the state to delay for long.”

Four Catholic schools in the impacted ZIP codes asked the governor to allow their facilities to keep operating with in=person learning, saying the precautions had been working.

Cuomo’s decision “clearly fails to take into account the positive progress our Diocesan school system has made so far this school year,” said Dr Tom Chadzutko, superintendent of the four schools. “It is unconscionable to think that after the many sacrifices our staff, students, and parents have made, and in spite of our almost non-existent infection rate, the governor has decided to force our four schools to close.”

“I think there is potential for this to work” and become an example for other places, said Saskia Popescu, an infectious disease epidemiology expert at George Mason University.

“But that being said, the human factors aspect can be a little bit challenging,” she added. “You do want to make sure people feel supported and not isolated and not that they’re being targeted unfairly.”

There are concerns that people in the targetted areas could feel stigmatised or simply go about their businesses in other neighbourhoods, furthering the spread of the virus. Experts say the approach depends on community support.