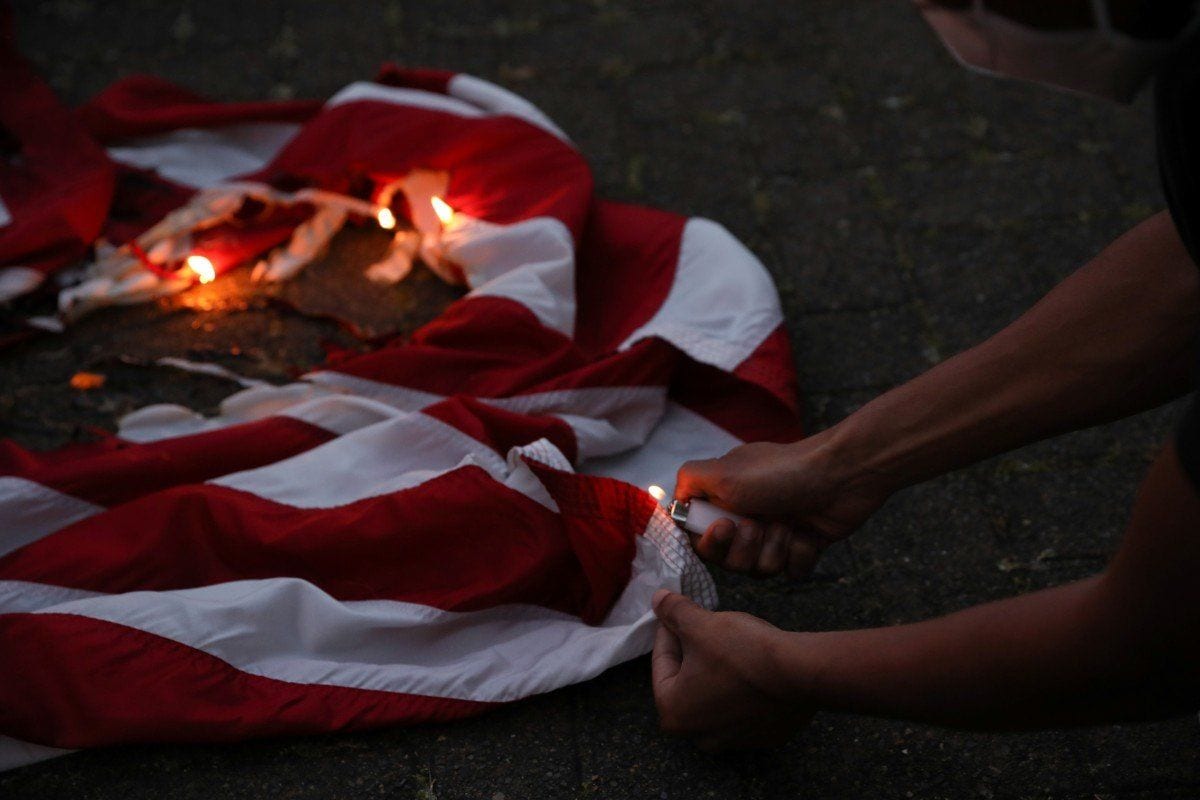 President Trump has threatened to send more federal law enforcement officers to major US cities to control the ongoing protests.

Mr Trump criticised a number of cities run by “liberal democrats” including NYC and Chicago, saying their leaders were afraid to act.

He said officers sent to Oregon had done a “fantastic job” restoring order aid days of protests in Portland. But locals say the federal officers are making matters worse.

State leaders are demanding the President remove the officers from Portland, accusing him of escalating the situation as a political stunt in an election year.

Speaking at the White House of Monday, Mr Trump reiterated his call for law and order.

“We’re sending law enforcement,” he told reporters. “We can’t let this happen to the cities.”

“We’re not going to let this happen in our country, all run by liberal Democrats.”

Trump praised the controversial federal law enforcement efforts in Portland. He had deployed the officers two weeks ago to quell the civil unrest.

Some officers have used unmarked cars and worn military-style camouflage on the streets, sparking outrage from Democrats and activist. In the past week, tensions between the officers and protesters have escalated.

The ongoing protests against police brutality started after the death of George Floyd, an unarmed black man, in Minnesota in May.

‘Not wanted or needed here’

Speaking on Oregon’s governor, Portland’s mayor and other state lawmakers, Trump said: “They’re afraid of these people …  that’s the reason they don’t want us to help them.”

The officers are part of a new Department of Homeland Security (DHS) unit made up of people from the US Marshals Service and Customs and Border Protection.

They have been deployed under an executive order protecting statues, signed by Trump last month. The order allows the officers to be deployed without needing the permission of individual states.

DHS is reportedly planning to deploy around 150 agents to Chicago this week. The agents will assist other law enforcement officers and Chicago police in fighting crime.

Chicago Mayor Lori Lightfoot said she was concerned about Trump deploying federal officers to the city and had contacted Portland’s mayor “to get a sense of what’s happened there.”

“We don’t need federal agents without any insignia taking people off the streets and holding them, I think, unlawfully,” Ms Lightfoot said.

Federal officers sent to Portland to “quell” protests have had this efffect pic.twitter.com/1ezTpS6C37

Speaking to CNN, Portland’s Major said there were “dozens if not hundreds of federal troops” in the city, adding: “Their presence here is actually leading to more violence and more vandalism.

“They’re not wanted here. We haven’t asked them here. In fact, we want them to leave,” he said.

Oregon’s attorney general has filed a lawsuit against the federal government for allegedly unlawfully detaining protesters and violating their constitutional rights of assembly and due process.