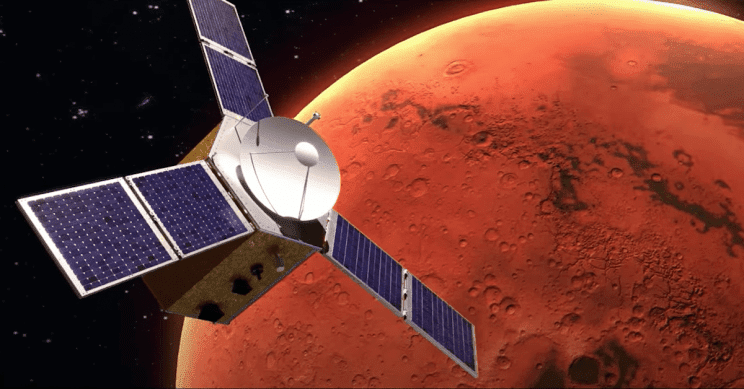 The UAE Mars probe named ‘Hope probe’ or Amal probe in Arabic has transmitted its first signal from space early Monday morning. This came after the spacecraft’s solar panels were deployed to charge its batteries following its separation from the launch vehicle.

The UAE Space Agency and Mohammed bin Rashid Space Centre (MBRSC) announced that the Ground Control station located in the Al Khawaneej area of Dubai had successfully received the first transmission from the Hope Probe at 3:10 am, Monday.

The UAE Space Agency and MBRSC have announced that the first transmission was received at 3:11am (12:11am GMT). The team of the Ground Control Station has analysed the data to ensure that the solar panels are facing the sun properly.

The Ground Control Team is monitoring the functions of the Probe to ensure that all systems are working properly.

The UAE launched on Monday the Hope Probe in a landmark mission to Mars, the first in the Arab world.

The rocket carrying the probe took off from Japan’s Tanegashima Space Center, marking the beginning of an almost 500 million kilometre journey into space.

The incredible #HopeProbe journey: from an ambitious idea to a historic interplanetary mission to Mars. It's happening today! #HopeMarsMission pic.twitter.com/XWo5Q9BvgS

The Hope Probe will be “the first probe to provide a complete picture of the Martian atmosphere and its layers when it reaches the red planet’s orbit in 2021,” according to Mohammed bin Rashid Space Center.

The probe is expected to reach Mars in the first quarter of 2021, the year the UAE celebrates 50 years since its unification.

The Emirates Mars Mission has cost $200 million, and Minister of Cabinet Affairs Mohammad al-Gergawi said the cost is considered “among the lowest in the world when compared with similar programs.”

Further details about the mission will be announced in a press conference that will take place in Mohammed bin Rashid Space Centre today at 1:00pm (10:00 am GMT).

We have lift-off. H2A, the rocket carrying the Hope Probe to space, has launched from the Tanegashima Space Centre in Japan.#HopeMarsMission pic.twitter.com/pRKZLOL7NT

The UAE’s Mars Mission’s duration is estimated to last for one Martian year (approximately two Earth years, or 687 days), according to the UAE Space Agency.

A unique aspect of this mission is that for the first time, a Mars exploration project will be able to take a global picture of the Martian atmosphere. It will do so by taking an integrated picture of the atmosphere throughout the day and for a long period of time, helping to capture data on the planet’s atmosphere in different seasons across the year. This data will be made available to the global community.

It will take seven months to travel the 493 million km, it is expected to reach its Mars orbit in February 2021 marking the 50th anniversary of the United Arab Emirates.

The UAE first announced plans for the UAE Mars probe project in 2014 and launched a National Space Program in 2017.