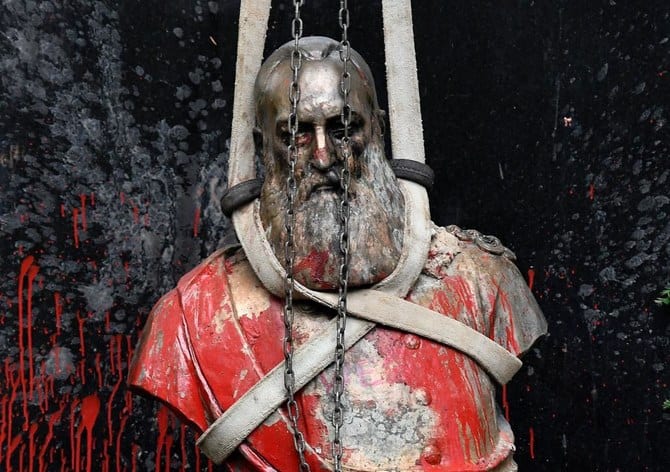 As Belgium marked the 60th anniversary of the end of its colonial rule in Congo, King Philippe’s words had resounding significance since none of his predecessors went so far as to convey remorse.

The removal of King Leopold II’s statue, a former monarch held responsible for the death of millions of Africans was taken off public display, took place only hours after Philippe’s letter was published. The monarch, who ruled Belgium from 1865-1909, plundered Congo as if it were his personal fiefdom, forcing many of its people into slavery to extract resources for his own profit.

In a letter to the Congolese president, Felix Tshisekedi, Philippe stopped short of issuing a formal apology, but proclaimed his “deepest regrets” for the “acts of violence and cruelty” and the “suffering and humiliation” inflicted on Belgian Congo.

The early years after he laid claim to the African country are especially infamous for killings, forced labour and other forms of brutality that some experts estimate left as many as 10 million Congolese dead.

In a letter sent to the Congolese president Félix Tshisekedi, the Belgian Head of State King Filip has expressed his “deepest regret” for the atrocities committed during King Leopold II’s rule in Congo

Following a short ceremony punctuated by readings, Leopold’s bust in the city of Ghent – Belgium, was attached to a crane with a strap and taken away from the small park where it stood amid applause. It will be transferred to a warehouse of a Ghent city museum pending a further decision from a city’s commission in charge of decolonization projects.

Belgium has long struggled to come to terms with its colonial past, instead of focusing on the so-called positive aspects of the colonisation. But the international protests against racism that followed the May 25 death of George Floyd in the United States have given new momentum to activists fighting to have monuments to Leopold removed.

There are symbols of Leopold II everywhere. There are over 100 streets and bus stops that are named after men who took part in the colonisation of the Congo. They must all go pending a formal enquiry ordered by the Prime minister Sophie Wilmes.

“Nowhere does it say we killed 10 million Congolese, that we cut off men and women’s hands to build Belgium”

Earlier this month, despite receiving condemnation from the Belgium Health Minister, about 10,000 people gathered in Brussels despite the social distancing measures implemented to fight the spread of COVID-19, with many protesters chanting anti-colonialist slogans.

The Butcher of Congo

After Leopold’s claimed ownership of Congo ended in 1908, the period when the country was privately ruled by Leopold II from 1885 to 1908. He handed it over to the Belgian state, which continued to rule over the colony 75 times Belgium’s size until the African nation became independent in 1960.

Leopold’s administration of the Congo was characterised by murder, torture, and atrocities, resulting from notorious systematic brutality. The hands of men, women, and children were amputated when the quota of rubber was not met. The number of people who died under Leopold’s rule in the Congo is estimated to be about 10 million.

Marchal, the Belgian scholar, estimates that Leopold drew $1.1 billion in today’s dollars in profits from the Congo during his lifetime. His life was celebrated in Belgium Ghent, Antwerp and Brussels.

Even in his own time, Leopold II was viewed as a monster. In 1885, he used the pretence of a scientific and humanitarian initiative to seize a vast part of Africa 80 times the size of Belgium.

Belgium has begun to confront its colonial past and looked toward reconciliation Tuesday, with the king expressing regret for the violence carried out by the country when it ruled over what is now Congo.

Since the relaxation of the Belgian nationality law, more than 1.3 million migrants have acquired Belgian citizenship and are now considered new Belgians. 89.2% of inhabitants of Turkish origin have been naturalised, as have 88.4% of people of Moroccan background, 75.4% of Italians, 56.2% of the French and 47.8% of Dutch people, however, only about 60,000 of Congo nationals have been nationalised in the same period.