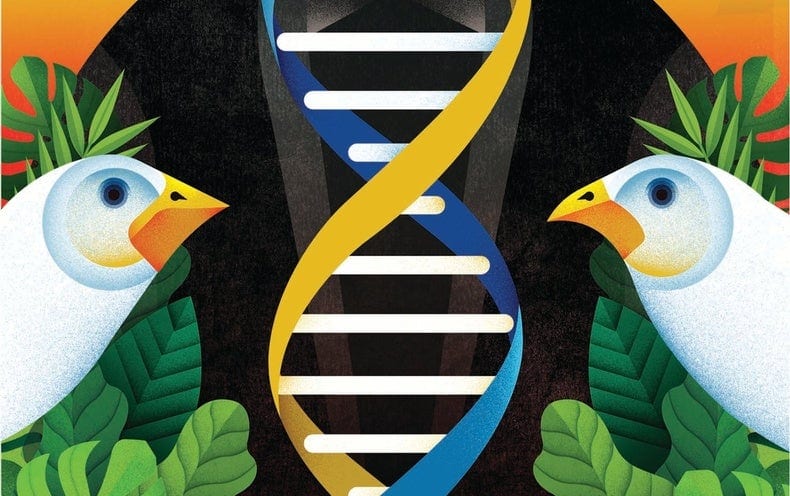 A new approach to cancer treatment is using lessons from Darwin’s theory of evolution. The treatment stems from the recognition that cancerous cells, just like other forms of life, mutate and evolve in response to a changing environment.

The Theory of Evolution by Natural Selection was first formulated in Darwin’s book “On the Origin of Species” in 1859, is the process by which organisms change over time as a result of changes in heritable physical or behavioural traits.

Darwin’s theory of Evolution is at the crucial to modern-day scientific research. In fact, it forms the principles behind many modern-day revelations. From how the trees that populate our forests to the animals in our backyards.

Traditionally in modern-day cancer treatment, cancer cells are continuously bombarding with drugs to try to kill them. This can encourage drug-resistant and cause cells to multiply and mutate, eventually creating an untreatable tumour.

What is Darwins Theory of Evolution

Darwinism or ‘Darwin’s Theory of Evolution‘ was developed mainly by work done by the English naturalist Charles Darwin in the 19th century. It is true other Naturalist had a major hand in developing this theory. but most scholars agree that he was the main founding father who pioneered Theory of Evolution.

In simple terms, the principles behind his theory state that all species of organisms arise and develop through the natural selection of small, inherited variations that increase the individual’s ability to compete, survive, and reproduce.

If Evolution is a change in the heritable characteristics of biological populations over successive generations. then this evolution also holds true on a micro-level. And according to a research team at the University of South Carolina Cancer cells are no different.

This research, published in Cancer Research, is led by Paul Newton from USC and according to Darwin’s theory of evolution is the principle behind the work they are doing at the research centre. Which will lead to individual treatment plans to combat tumour growth.

How Darwinism is helping fight Cancer

Without getting too technical, USC researchers have been working on research to understand tumour growth, using complex mathematical models that simulate and predict the dynamics of three different factors during intermittent adaptive drug therapy. Split into three phases; pre-operation, during and post-operative care.

According to Paul Newton“Tumors are made up of a heterogeneous collection of cell types, all competing for resources, with varying degrees of chemo-resistance”.

Then Newton went on to say. “Our models use evolutionary game theory to design treatment schedules that adaptively control the competition without letting a resistant species take over, which often happens with the strategy of killing as many tumour cells as possible as quickly as possible. Evolution matters.”

The same is true of cancer cells. The ones that persist post-treatment tend to be those that are resistant to cancer treatment. Instead, Newton said, keeping all the tumour cells in competition with each other could allow for more sustainable, long-term results.

A New Approach to Cancer Treatment Draws Lessons From Darwin

Although all cancers may look alike on the surface, on a micro-level, genetically, they are all very different. And as they mutate the treatments become less effective.

Early in the treatment cycle, cancer patients might demonstrate a strong response to the continuous use of a maximum dose of one drug. However, over time, research has shown eventually many patients develop drug resistance and their tumours recur.

According to Newton, when a tumour develops resistance to one drug, the cells become more susceptible to another drug. Thus a way to combat ‘drug fatigue’ is to use two or more drugs sequentially and create a treatment plan that individually attacks the cancer cells from different angles.

Significantly, this is leading towards an adaptive approach to cancer treatment. Where each patient’s treatment plan would be truly personalised on the basis of the actual tumour and relative to its state of evolution rather than a one-size-fits-all treatment regime

As it stands the treatment is a long way from being a viable treatment, clinical trials have only just started. As it stands researchers are still battling with a process to design the best schedules and dosing methods and how to combine the use of multidrug combinations.