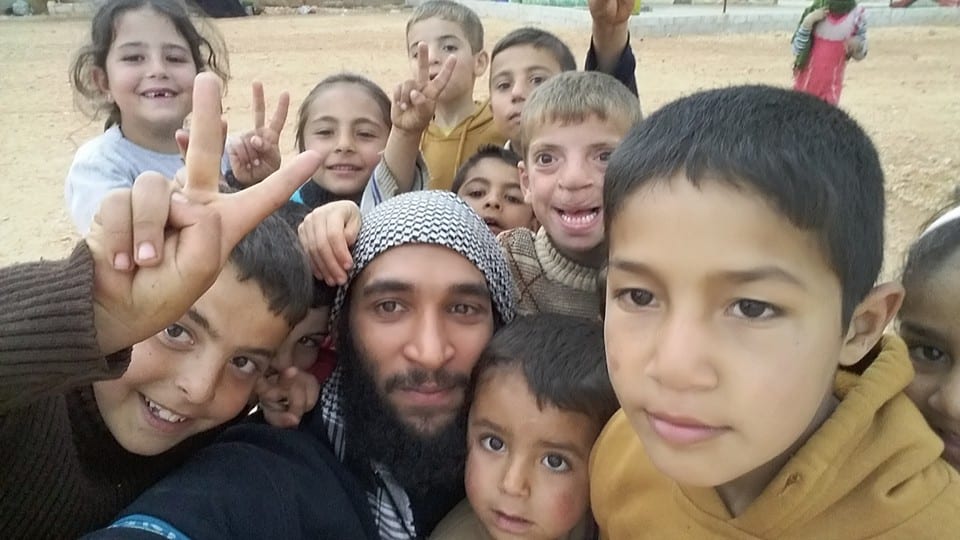 A British aid worker was kidnapped on Monday night by members of a Sunni Islamist militant group in the last rebel-held stronghold of Idlib in Syria.

Tauqir Sharif, 31, from Walthamstow, in East London, lives and works in the northwestern Syrian city, with around 200 other British humanitarian workers who form a coalition community group called The Unity Project.

According to an eye witness account, around 15 masked men snatched the aid worker from his home around 8.30 pm Syrian time. The raid happened near the Atmeh refugee camp close to the Turkish border and from there Sharif was taken to an unknown destination.

Delivering aid in Syria is fraught with difficulties but those humanitarian workers operating on the ground locally are usually allowed by the controlling HTS group to move about freely.

Occasional clashes between charities and rebel groups operating in the area have been reported previously making the delivery of humanitarian aid even more precarious than in most war zones.

Sharif and his British wife Racquell Hayden-Best have been in Syria since 2012 when he acted as the logistics leader for the first aid convoys from Britain to the war-torn country, using ambulances to take in food and medical supplies. He stayed behind to set up makeshift schools and launch his own aid organisation.

He is now a well-known figure among British charities operating in Syria and is hugely popular on the ground with local Syrian people. His popularity may have contributed towards last night’s kidnapping as anyone with a rising profile is treated with resentment and suspicion by the increasingly paranoid HTS militia leadership.

Journalist Bilal Abdul Kareem is now publicly calling either for “the immediate release of Mr Sharif or an official charge against in writing coupled with a path to a fair trial and justice “.

Based in Idlib, the US journalist who is a co-founder of the OGN news network said: “Unfortunately we have been seeing too many cases of HTS arresting those who fought long and hard for the Syrian people and have not been formally charging them.

“This leaves the detainee in limbo and his family worried sick. This is exactly the kind of oppression we have pledged to stop in Syria. I personally have tried many times to encourage HTS to deal with the people formally and to observe detainee rights.”

He added: “HTS fighters have done a lot of good for the Syrian people but I feel the leadership isn’t in lockstep with its members when it comes to justice”.

Sharif is hugely popular in Idlib among locals and refugees after raising hundreds of thousands of pounds in aid through the social networks, television fundraisers and other crowdfunding appeals for charity.

The news will be yet another blow for Sharif, known affectionately as Tox by his friends, after his UK citizenship was revoked and his eldest daughter refused a passport back in May 2017.

He has been highly critical of the British Government’s actions and previously urged the Home Office to review its revocation policy for all workers engaged in humanitarian projects in war and conflict zones.

He became the first aid worker to boycott the secretive citizenship legal process at the SIAC courts last year describing the process as an “affront to justice.”

The removal of British citizenship relies heavily upon the use of secret evidence in secret legal proceedings, with an individual’s only hope for defence resting with a state-vetted special advocate.

Bizarrely, the vetted lawyer can not disclose any details of the state’s case to the accused which in turn makes it impossible for the defendant to challenge the evidence being used against them.

When I interviewed him for WTX News last year during a visit to Idlib he said: “The life-saving work I do today was inspired by what I believe are the British values of compassion and doing good for others. He had just launched The Unity Project, a coalition of like-minded individuals and charities operating on the ground in partnership with local Syrians, Syrian refugees and Western aid workers.

After it emerged his citizenship had been revoked he accused the British Government of “making it a crime to care” and he reserved most of his criticism later for the secret court system which would try him in his absence.

“The SIAC and special advocate system which reinforces it is an affront to justice,” he said. “Not being able to see, let alone challenge the evidence used against me, made me realise very quickly that there would be absolutely no chance of a fair trial.”

Appealing against the UK government’s decision, he was preparing a case for a fair hearing in an open court when he was snatched last night by members of the HTS militia.

There is a dispute over whether Sharif has been arrested by the group or kidnapped as, at the time of writing, no ransom had been demanded. But the behaviour of HTS has become increasingly unpredictable, according to eyewitnesses on the ground.

There are concerns the group has become lawless and authoritarian as Idlib slides into further chaos coming under attack from Assad forces, the Russian military as well as Iranian-backed militias.

Idlib is regarded as the last major stronghold for anti-Assad government rebels and jihadist groups in Syria. While pro-Assad government troops and allied Russian and Iranian forces have captured parts of Idlib, rebels and Islamist fighters still control strategic parts of the border province. HTS is the main Islamist group that operates in Idlib.

This is not the first time Sharif has been targeted since he arrived in Syria. Groups from Daesh/Isis have also tried to seize him. Last year he revealed Daesh had tried to kill him, adding that they are the “worst representation of Muslims.”

Working alongside other British ex-pats including clinicians, doctors, hospital staff and teachers Sharif founded the organisation Live Updates From Syria in 2012, to provide support and help to families living there,

Widows, children and orphans are among some of the groups he is helping in more than 40 projects on the ground with 170 staff, a mix of ex-Pats and Syrians.

He has always insisted that he has broken no laws and points to his proven track record in the humanitarian field of his intentions and reasons for being in Syria.

‘Threats to my life because I distribute aid’

During one British media interview, he said he carried a handgun “for my self-defence and that of my family. I’ve not had to use it. There have been threats to my life because I distribute aid. It’s highly dangerous work in conflict zones.

“We travel in convoy to different towns, we come under attack from all sides, sometimes finding ourselves in the middle of battles or [getting] attacked by those who want to steal. We have to protect not only the aid but also ourselves.”

He admitted that until 2017 he used to carry an assault rifle and had “stupidly posed with it” for so-called trophy pictures until someone tried to blackmail him over the images.

“I have never aligned myself with any group involved in the conflict or taken part in any operation that is not related to my aid work,” he said at the time adding that he no longer carried an assault rifle since hiring security to protect the aid distribution.

The British aid worker is hugely popular with local Syrians

Last year another British aid worker, Birmingham-born Mohammed Shakiel Shabir was kidnapped by one group which demanded a $4m [£3m] ransom. He was freed in a dramatic raid on the kidnap home and gave an exclusive interview to WTX News.

London doctor Shajul Islam, also based in Idlib, released a statement on Twitter early today (Tuesday) saying: “It saddens me to tell you, that our brother Tox has been arrested by the local authority here in Idlib. Although I strongly disagree with the way he was taken, it seems that there are some serious allegations that are being investigated. Let us not jump to any conclusions …”

Dr Islam has been in Syria for some years now and works closely with the British ex-Pat community and those linked to The Unity Project. He was hailed a hero for treating gas attack victims after nearly 100, including 20 children, died in the chemical weapons strike on the rebel-held city. Dozens more were left gasping for air, convulsing and foaming at the mouth.
………………………