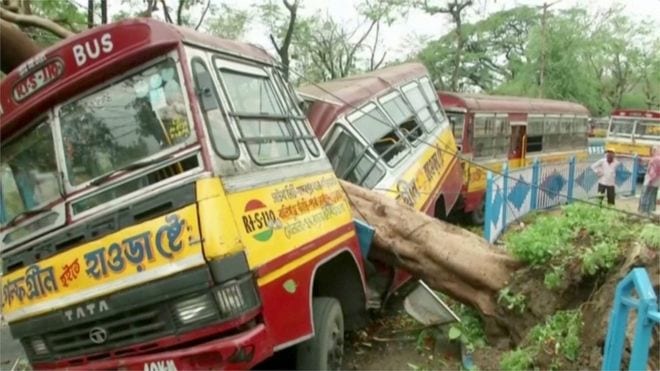 The eastern Indian city of Kolkata has been devastated by a powerful cyclone which has killed at least 22 people across India and Bangladesh.

Rescue teams searched for survivors a day after the most powerful cyclone in over a decade devastated coastal villages, destroying mud houses, ripping out electricity poles and washing away bridges.

The cyclone weakened as it moved along the Bangladesh coast but still unleashed heavy rains and fierce winds in Cox’s Bazar, the district which houses about one million Rohingya refugees from violence in Myanmar.

Authorities began surveying the damage on Thursday after millions spent a sleepless night.

The full extent of the casualties and damage to property inflicted by Cyclone Amphan would only be known once communications were restored, officials said

My thoughts are with the people of Eastern India and Bangladesh as they weather the impacts of Cyclone Amphan. We know the timing of this is particularly challenging, with the economic and public health consequences of COVID-19 and the upcoming Eid holiday.

They added, “at least a dozen people died in the Indian state of West Bengal and eight in neighbouring Bangladesh.”

In neighbouring Bangladesh, officials said 10 people had died, including a five-year-old boy and a 75-year-old man, hit by falling trees and a cyclone emergency volunteer who drowned.

Most deaths were caused by trees uprooted by winds that gusted up to 185 km per hour, and a storm surge of around five metres that inundated low-lying coastal areas when the cyclone barrelled in from the Bay of Bengal on Wednesday.

Millions across India and Bangladesh were left without power in the wake of the most powerful cyclone to have hit in more than 20 years.

The storm is the first super cyclone to form in the Bay of Bengal since 1999. Though its winds had weakened by the time it struck, it was still classified as a very severe cyclone. Authorities expecting losses of over $1bn.

Coronavirus restrictions have been hindering emergency and relief efforts. COVID-19 and social-distancing measures made mass evacuations more difficult, with shelters unable to be used to full capacity.

Authorities in both countries sent masks and sanitiser but social distancing was virtually impossible as families packed into reinforced schools, government buildings and community halls.

Cyclone Amphan made landfall in India and Bangladesh, affecting a region home to poor fishing villages and 1M refugees.

Amphan began hitting the Sundarbans, a mangrove area around the India-Bangladesh border home to four million people on Wednesday afternoon, before carving north and north-eastwards towards Kolkata, a historic city that was the capital of the British Raj.

West Bengal chief minister Mamata Banerjee said the devastation in Kolkata, the state capital, was “a bigger disaster than Covid-19”.

Three districts in West Bengal – South and North 24 Parganas and East Midnapore – were very badly hit. In Bangladesh, the worst-affected district was Satkhira, where large areas have been flooded as embankments collapsed in several places.

Initial assessments of the damage are being hampered by blocked roads and flooding in all these areas.

Designated a super cyclone, Amphan has weakened since making landfall. Moving inland through Bangladesh, it was downgraded to a cyclonic storm on Thursday by the Indian weather office. And the storm was expected to subside into depression later.

Authorities in both countries managed to evacuate more than three million people, moving them to storm shelters before Amphan struck. But the evacuation effort was focused on communities that lay directly in the cyclone’s path, leaving villages on the flanks still vulnerable.

How the cyclone hit the residents, they say

“I have never seen such a cyclone in my life. It seemed like the end of the world. All I could do was to pray… Almighty Allah saved us,” Azgar Ali, 49, a resident of Satkhira district in Bangladesh.

“Even with all doors and windows tightly shut, my house groaned under the pressure of the howling wind outside. Within 45 minutes, the streets outside got flooded, even as floodwaters rushed into the ground floor of homes.

Kajal Basu, who lives on the 12th floor of a high-rise building in the city, wrote on Facebook after the storm began: “It is like the vault of hell outside.”

The building seemed to be “swaying from side to side, mimicking an earthquake”, he said. “Sounds of tortured metal, glass breaking. Palm trees uprooted. Power lines came crackling and spitting at three places nearby.”

“Thank God, we are safe,” said a resident, who shared footage of tiled roofs being peeled off by the force of the wind and blown away.

Most people were at home when the storm struck. Kolkata and the rest of India are in lockdown because of the coronavirus pandemic.

As Cyclone Amphan hit eastern India and Bangladesh, evacuation of millions were complicated by the coronavirus pandemic https://t.co/SE1czVDnJ7 pic.twitter.com/xwUmuiZYc3

Cyclones in the region

The cyclone came at a time when the two countries are battling to stop the spread of the coronavirus, and some evacuees were initially reluctant to leave their homes for fear of possible infection in the packed storm shelters.

Cyclones frequently batter parts of eastern India and Bangladesh between April and December, often forcing the evacuations of tens of thousands and causing widespread damage.

Sir @narendramodi, Bengal is a part of India. 🙏 #Amphan pic.twitter.com/ynyhJND3lC

Officials in Bangladesh fear Amphan will be the most powerful storm since Cyclone Sidr which killed about 3,500 people in 2007. Most died as a result of seawater surging in.

Meteorologists have also warned of flooding and deadly mudslides.

My Tweets
We use cookies to help identify your computer so we can tailor your user experience, track shopping basket contents and remember where you are in the order process. WTX News Our Cookie Policy
World sees highest daily increase in coronavirus cases
Daily News Briefing: NHS fees to be scrapped for overseas health staff, after mounting pressure from MPs
To Top
Weekly