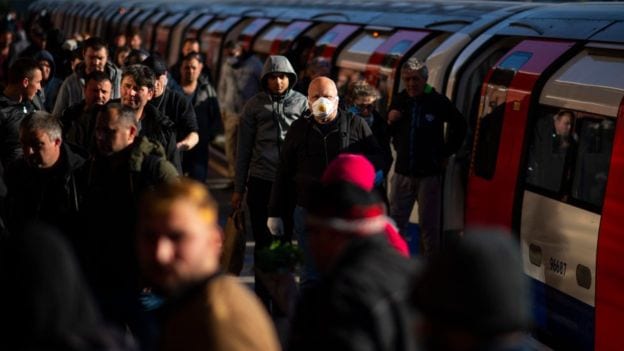 The prime minister has admitted his government’s plans for easing the Coronavirus lockdown is causing “frustration”, as he faces a growing revolt from doctors, nurses, teachers and regional councils.

Boris Johnson acknowledged the situation had become more “complex” but said he would trust what he called “the good sense of the British people” and thanked the public for “sticking with us” so far.

But the mayor of Greater Manchester, Andy Burnham, warned the prime minister of a “fracturing of national unity” if he ignored the concerns of the regions over his roadmap out of the  COVID19 crisis.

The PM wrote in the Mail on Sunday that more complicated messages were needed during the next phase of the response and as restrictions changed.

The devolved administrations in Scotland, Wales and Northern Ireland have refused to follow Mr Johnson’s strategy for easing the lockdown, while cities such as Liverpool have said they will not start reopening schools in June as the government wants.

In a reference to confusion and criticism of the government’s new message urging people to “stay alert”, Mr Johnson said the government was attempting something that has “never had to be done before”.

The government changed its slogan from “stay at home” to “stay alert” in England on 10 May. The stay home message remains the same in Scotland, Wales and Northern Ireland, which have their own powers over restrictions.

Mr Burnham said that despite taking part in a call two weeks ago with Mr Johnson and eight other regional mayors, he was given no real notice of the measures announced by the prime minister in his address to the nation last Sunday.

He said: “On the eve of a new working week, the PM was on TV ‘actively encouraging’ a return to work. Even though that would clearly put more cars on roads and people on trams, no one in the government thought it important to tell the cities that would have to cope with that.”

Mr Burnham spoke out as a poll reported public support for the government’s handling of the COVID-19 crisis has slipped sharply.

The survey by Opinium found 39% backed the government’s response, down from 48% a week ago.

Those saying they disapproved has risen from 36% last week to 42%.

Opinium’s head of polling Adam Drummond said it was the first time disapproval of the government’s handling of the crisis was higher than approval.

“In part, this was likely inevitable as the relatively simple and almost unanimous decision to lockdown has given way to much more contestable decisions about how and when to open up,” he said.

In his article for the Mail on Sunday, Mr Johnson said he wants the UK to return to “near-normality” by July.

He said the British public’s “fortitude” would enable them to survive the crisis and regain “the freedoms they hold dear” and that people’s “perseverance” and “good common sense” will enable the country to “inch forwards” out of lockdown.

“I understand people will feel frustrated with some of the new rules,” the PM wrote.

In the midst of the coronavirus crisis, Boris Johnson wants the UK to return to “near-normality” by easing the lockdown rules by July

“We are trying to do something that has never had to be done before – moving the country out of a full lockdown, in a way which is safe and does not risk sacrificing all of your hard work.

“I recognise what we are now asking is more complex than simply staying at home, but this is a complex problem and we need to trust in the good sense of the British people.”

He added that he wanted to thank the public personally “for sticking with us and – most of all – for being so patient ..a. nd I want to reassure you that there is a route out of this.”

The PM’s words came as the government sought to reassure parents in England it will be safe to send their children back to school next month.

Education Secretary Gavin Williamson told Saturday’s daily Downing Street briefing “we owe it to the children” to get pupils back in school. Mr Williamson said he knew some parents were “very anxious” about reopening schools, but said it would be a “cautious, phased return”.

It followed a row over the government’s plan to begin a phased reopening of primary schools in England no earlier than 1 June. Teachers’ unions have said the date is too soon to be safe – and the British Medical Association has said it is right to be cautious.

England is the only UK nation to set a date for schools to start to reopen. Schools in Wales will not reopen on 1 June, while those in Scotland and Northern Ireland may not restart before the summer holidays. Meanwhile, Labour leader Sir Keir Starmer has said different approaches to tackling coronavirus across the UK nations will not “help us out of this crisis”.

Coronavirus records in the UK

There are more than 240,000 confirmed cases of coronavirus in the UK and more than 34,000 people have lost their lives

The number of new daily confirmed cases has been falling since a peak in April, despite an increase in the number of people being tested. The majority of the UK’s deaths have been in England, with more than 30,000 so far – about 90% of the total for the UK.

In Scotland, the official government figure for deaths is 2,094, but data on death registrations from the National Records of Scotland (NRS) suggests it is at least 3,213.

In Wales, the death toll stands at 1,191, while there have been 473 deaths in Northern Ireland. However, the actual overall UK death toll is thought to be higher than suggested by government figures, which only count those who have tested positive for the virus.