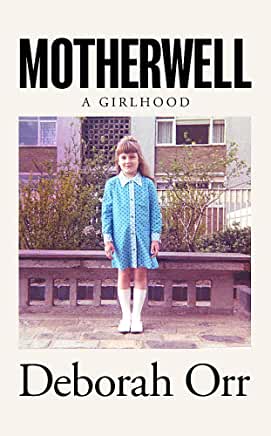 Her brutally frank observations reveal an upbringing in an atmosphere of what she perfectly describes as “performative hate”.

Journalist Deborah Orr died from breast cancer last year aged 57 causing an unprecedented outpouring of grief and sorrow from those who knew her.

She left behind a memoir that had been a long time in the planning. It is warts and all account of the sparky relationship she had with her redoubtable mother Win and father John and her childhood.

Her book is both complex and moving, exploring the close family bonds that can hold us back. The story, her story, is deeply personal but it goes beyond the people in her life as it also takes a searing look at the community which shaped her so well.

Called Motherwell, it is named after the gritty former steel town near Glasgow where Orr was raised. I found myself nodding and agreeing, laughing and crying along with Orr as she describes her environment, childhood and the antics of those around her.

She was depicting the working-class Scottish life in the 60s and 70s which was oh so similar in so many ways to my own upbringing in a coal mining village in County Durham.

Orr demonstrates how working-class identity can be weaponised by intolerant bigots who vote for their own demise. This is something most of us brought up in that environment witness but are often too afraid to admit or even discuss.

However, her brutally frank observations reveal an upbringing in an atmosphere of what she perfectly describes as “performative hate”. It’s not that Motherwell had the monopoly but its rapid decline, propelled by the “greed is good” culture of the Thatcher era permeated into the homes of many working-class families, fermenting a feeling of hopelessness and permanent loss.

Having met Deborah Orr several times it’s also almost hard to believe she was the victim of occasional bullying during her gawky, troubled childhood. I’m really sad I didn’t get to know her better since our working-class upbringings were so similar in so many ways.

We were first introduced when I was working as a current affairs TV researcher in London. I had originally wanted to book Will Self, the author, journalist and political commentator. He couldn’t make the show and suggested I book his wife, instead.

A bit of an unknown quantity, she arrived, slightly stressed since she didn’t have childcare, and asked me to look after her lively four-year-old son otherwise she couldn’t do the show. Naturally, I had to agree, but within minutes of the show starting the little imp had scarpered.

Frantic, I spent the next half hour trying to find him before she came out of the studio. Just in time, I discovered him wrapped in the folds of a studio curtain and was able to return the child to his doting mum, who was none the wiser.

After that drama, I was able to watch the show on record and she was brilliant. Orr was a professional. She was tough, uncompromising when needed to be and very articulate, clever and acerbic wit. She was actually much better than Self and so she was asked back as a guest on several more occasions, mercifully without kids in tow.

She divorced Self in 2018 although doesn’t really mention him much in the book so, if you’re after any dishing of dirt on him as a partner, husband or ex you’ll be largely disappointed.

However, she does drop several delicious insights such as when she first moved in with Self and he “inspected my collection of books, plucking the ones he fancied out of his shelves and taking them up to his office… He didn’t ask, or mention it in any way, and I tried and failed not to mind.”

A constant theme of her book is gender and the conflict this created between mother and daughter. Win was really part of the patriarchy, and therefore part of the problem for female empowerment, like so many working-class women of her generation.

Very early on in the book, it becomes clear this is a story of a dissatisfied, unfulfilled mother who is jealous of her clever daughter.

As Orr observers in a searingly honest passage in Chapter Six: “It makes me grieve for the lost Win. The bright, talented girl who could’ve got so much more out of her life if all of her life hadn’t been squashed in to the tiny space of husband, home and children.

“My mother’s whole existence, all 76 years of it, was ordered by the choices of men, their attention, their validation. That was everything to Win. She didn’t even think about it, was not even aware of it. Being in the good graces of men attracting them, keeping the one you chose as your husband, these were the only important ways in which to gauge the worth of a woman.”

Mother and daughter clashed on her wedding day when Orr announced she would be retaining her name, and therefore own identity, instead of embracing the identity of Mrs Will Self. She likened it to dropping a “psychological hydrogen bomb.”

As the book unfolds the narrative of the happy marriage of her parents, as perceived by a young Deborah, begins to fall apart leaving, instead, a picture of something rather negative, almost toxic.

Win emerges as a controlling, manipulative individual who wanted to preside over her daughter’s choices in life, including, marriage, children and education. Orr reveals: “I realise now that my mother’s main trouble was her pathological inability to understand at all that I was a separate entity from her. She wanted to keep me with her, in the same way as she wanted to keep her arm with her.”

Her father John, a witty, humorous and kind man as seen by the young Orr later is revealed as a bullying, sectarian bigot. His once acceptable humour fails to travel well over the decades and is exposed by the adult Orr.

Apart from the forensic postmortem examination of parental and family relations, the book also shines a light on a working-class way of life that has now almost vanished in most towns and cities across Scotland and northern England with the closure of steelworks, pits, shipbuilding and other heavy industries.

In many ways, Orr has presented us with a great sociological study on post-war, working-class Motherwell charting the rise and fall of Ravenscraig steelworks which eventually closed in 1992.

On the day the Ravenscraig plant was demolished, she watched the blast with her parents and brother David from behind a cordon. She wrote: “The crowd was sparse. There was still a lot of bitterness. It took six seconds for that huge, blue gasometer and those … massive elegant cooling towers to come down.” She remembers the big hole or scar that was left behind in the town and in so many lives.

I found myself lamenting the passing of Orr more and more with the turning of each page because, like her mother, she left our lives unfulfilled. This memoir is a powerful testament to the literary giant that was awakening within Orr and I wonder how many more powerful books, stories and observations she took with her.