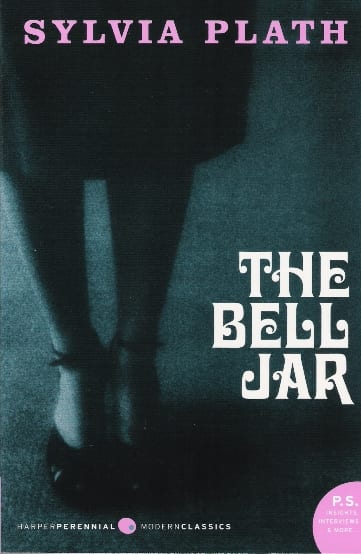 Like all good reads, Sylvia Plath’s The Bell Jar has so many layers to it and is the book I’ve chosen today for another of my literary revisits.

The Bell Jar was banned by some bookshops in the Sixties because of its uncompromising content subjects of both suicide and sexuality. The novel also ruffled a few male feathers because of the critical stereotyping of women as both mother and wife.

In short, this American classic made some people feel damned uncomfortable!

It was first published in January 1963 but under the pseudonym of Victoria Lucas although the American poet and short story writer’s real identity surfaced following her death. The Bell Jar, her one and only novel, was later reprinted under her real name posthumously.

Those who knew Plath said she would have chosen anonymity because the book is almost an autobiography chronicling her own mental breakdown and eventual recovery. It also explores societal expectations and pressures challenging women in the 1950s.

In addition to her own concerns about her mother’s feelings the publisher, apparently, was also nervous of the potential threat of litigation and so the name of Victoria Lucas was chosen.

Tragically Plath committed suicide one month after the publication of what turned out to be her only novel robbing the world of a great, untapped literary talent. Plath’s emerging preoccupation with suicide in The Bell Jar is quite visceral and I found it unsettling simply because of the book’s tragic backdrop.

Often credited with advancing the genre of confessional poetry Plath was best known for two of her published collections, The Colossus and Other Poems and Ariel.

But it’s The Bell Jar I want to focus on today. Based on college student Esther Greenwood who has aspirational yearnings to become a poet, the storyline charts the arrival of a gifted student to New York.

The main character Esther is chosen for a prestigious month-long internship as a guest editor of Ladies’ Day magazine, based in New York but the promises of the Big Apple fail to impress Esther who is continually struggling with others expectations of her.

Her life begins to slide out of control amidst cocktail parties and piles of manuscripts. Plunging into a depression she grapples with the relationships of those around her who live in a society which simply negates the aspirations of talented women.

Two other students whose ideas of femininity clash with Esther’s also exacerbate the situation. At one end of the spectrum is the tight buttoned, virginal Betsy contrasting sharply with the rebellious, sexual and ebullient Doreen.

After being turned down for a writing class she spends the remainder of her summer at home with her widowed mother where she wrestles trying to write a novel. The continual inner conflict and struggle send her into a spiral of despair and a series of suicide attempts including one overdose.

Eventually, she becomes an inpatient in an asylum where she undergoes electric-shock treatment which leaves her traumatised.

After that harsh treatment she is seen by a more enlightened psychiatrist and this is where the title of the book emerges. She agrees tentatively to undergo more electric-shock treatment but this time the experience makes her feel as if she has been freed from a bell jar suspended above the hospital bed.

I’m not going to reveal any more of the plot suffice to say it is sad, an emotional roller coaster and all the more thought-provoking when you consider its autobiographical nature.

But it is a damning indictment on the social politics of the 1950s where women were restricted in education, career and intellectual achievement by their gender.

The Bell Jar is a masterpiece which predictably, following her own suicide, puts an unforgiving focus on the hopelessness of the author’s own mental state. Had she lived on we would probably also be talking about the witty, insightful and poetic observations made in the book.

And as the opening lines of the book remind us, it’s also the era of McCarthyism where paranoia, dirty tricks and betrayals from the Cold War tend to set the initial tone.

“It was a queer, sultry summer, the summer they electrocuted the Rosenbergs,” which is a reference to the 1953 execution in New York of Julius and Ethel Rosenberg, who were convicted of conspiring to pass American nuclear secrets to the Soviets. The Rosenbergs proclaimed their innocence right up to the time of their deaths, by the electric chair became the first U.S. citizens to be convicted and executed for espionage during peacetime. Their case remains controversial to this day, but that’s a story for another time.

First published by William Heinemann in 1963 there are quite a few secondhand copies to be had for under a fiver although most new copies can be ordered from good book shops for around £8.