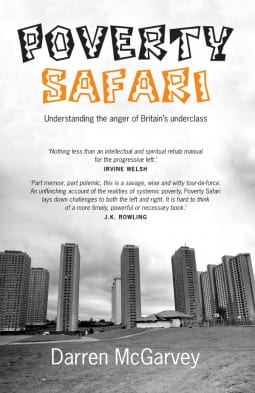 Time for liberal intellectuals to STFU and listen to someone who really knows about poverty and the problems it causes, says Yvonne Ridley’s book review of ‘Poverty Safari’. She revisits the award-winning book Poverty Safari by Darren McGarvey.

I’ve never met Darren McGarvey and, depending on his mood, I’m not sure I would welcome the experience but he has written a book which all of us should revisit at least once during the Boris Johnson years.

McGarvey’s brutal and unrelenting narrative on his scorching critique of poverty in Britain pumps out excoriating doses of anger on every page and not without justification.

We all know poverty exists but unlike the liberal, the intellectual elite from the middle classes who’ve made a living out of writing papers, articles and books on the subject, McGarvey has lived it, endured it and survived it. This is what makes his book so real and so compelling it won the prestigious Orwell Prize for political books.

Called Poverty Safari, it is a savage indictment on 21st century Britain but it also exposes the hypocrisy at play in the liberal media from pretentious columnists, academics and journalists who write compassionately about poverty while not paying any attention to the likes of McGarvey or the causes of the problem.

I won’t name names (McGarvey probably would) but they know who they are as they strut around newsrooms, wringing their hands, deriding the follies of the Left while spewing confused, liberal claptrap or quoting Orwell at dinner parties after chugging copious amounts of Hungarian red wine.

In Poverty Safari, Darren McGarvey (@lokiscottishrap) describes his chronic deprivation in Glasgow & criticizes excess identity politics as he reflects on it.

These people have rarely been within a mile of a council house, ever encountered an angry man or have experienced the factory floor of poverty and all the abuse, violence and brutality bubbling just below the surface. Of course, I’m sure they were at the head of the queue to bootlick McGarvey as he won the Orwell Prize but would have switched off as he talked about social values like democracy and solidarity when it comes to the poor, working classes in the Gorbals.

The book is perfectly titled because he drags the reader on a true safari of poverty. It’s only a pity those pretentious, arrogant columnists don’t join him to listen to real people and their problems from some of the most deprived communities in existence. Most safaris enable viewers to spy on the indigenous species from a safe distance but McGarvey removes the safety net and hurls the reader right into the heart of the problems he once took for granted as normal life and living.

Parallels can be drawn between the Scottish rapper who performs under the name Loki and George Orwell who equally shocked society in his own memoir about poverty, Down and Out in Paris and London. Based on his own experiences growing up in Pollok, Glasgow with a violent, alcoholic mother he didn’t have to travel far to draw on real-life testimony.

The truth is those who’ve never experienced what it is to be working class or born into extreme poverty continue to fail to grasp the realities and complexities of both. Few of the political classes, from the so-called Left or Right, will ever really grasp the issues unless they stop lecturing and start listening to those stuck in the basement of life.

McGarvey was, for a while, treated as a darling by the liberal media and was wooed and courted by the likes of the BBC as he spoke out about his brutal environment, the causes of poverty and his own experiences. Politicians, the BBC and aid workers beat a path to his door so he could talk with authority about homelessness, alcoholism and drug issues.

However, those who wanted to help him – and were being paid to do it – encouraged him to talk about his upbringing but as soon as he began questioning the root cause of poverty he was patronised and told to stick to the narrative they wanted to hear. The moment he started being empowered and began expressing opinions, the do-gooders would try and shut him down … only they, it seemed, were qualified to talk about the roots of poverty, mental illness and unemployment.

McGarvey became adversarial with those who tried to manipulate and use him. He quickly learned that those he challenged were quick to cast him out as soon as he began to criticise and identify the real issues of being working class. God forbid the working classes should ever have an independent voice!

Straying off the comfortable, liberal script cost him and once the social deprivation agenda moved on, he became voiceless again. Thank goodness McGarvey continued to get angry and outspoken. This book, like poverty, is not going to become irrelevant anytime soon thanks to the permanent growth and roots of poverty.

He doesn’t believe politicians or governments can solve the issue of poverty alone nor can they be held solely to blame because of the complexities, platitudes and tribal thinking. Instead of looking for scapegoats, if society is going to be serious about tackling poverty then we need to listen to voices like McGarvey and work out a cross-party solution instead of blaming each other.

* Poverty Safari is published by Picador in association with Luath Press for £7.99