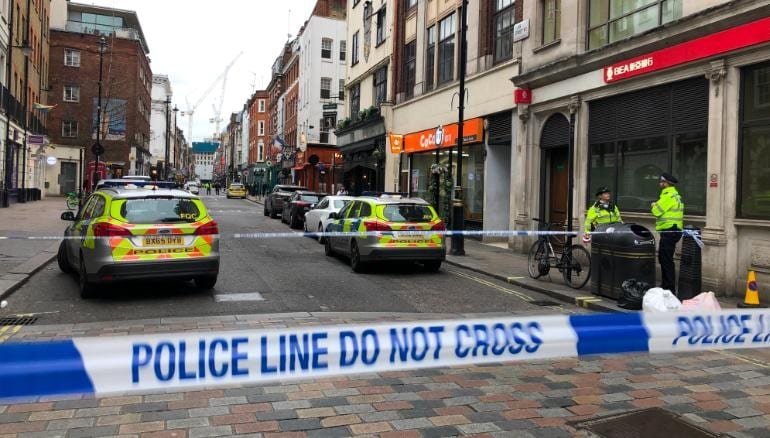 A busy area of central London has been shut down for a second consecutive day after police found another part of an unexploded World War II bomb.

Soho’s Dean Street was blocked off and workers were told to leave their offices again following the discovery on Tuesday.

“Another part of yesterday’s WW2 ordnance has been discovered,” police tweeted Tuesday afternoon.

Yesterday Police were called at approximately 13:42hrs on Monday, 3 February to reports of a suspected WWII ordnance discovered at a building site near Dean Street, #Soho.

Any police officers working on removing the WW2 bomb in #soho head over to Byron Wardour Street and show this tweet to get your #free burger and fries. Thanks for keeping London safe 🙏 @MPSSoho @Metpoliceuk @Policescope32 @MPSSoho @metpoliceuk 🍔👌

The cordon had previously been lifted, but the second discovery prompted a smaller area to be blocked off once more.

Construction workers first came across the bomb near the Soho Hotel on Monday, prompting a sizable portion of the neighbourhood to be shut down by police and hundreds of people to be evacuated.

We have no update as of yet & all the #Soho road closures mentioned below are still in place.

The cordon had previously been lifted, but the second discovery prompted a smaller area to be blocked off once more. Despite the commotion, the local people and businesses were in good spirits. The entrance to the Soho Hotel was among the areas shut down, with dozens of officers and a number of vehicles controlling the perimeter of the cordon.

During the war, German air raids dropped more than 12,000 metric tons of bombs on the British capital and killed nearly 30,000 Londoners. Most of that damage was done during the Blitz between 1940 and 1941.

A timely reminder that the ripples of #WW2 and the #Blitz are still with us_ West End at War Bomb Map Record @WCCLibraries #Archive #Soho #London https://t.co/PVNuT1GYje pic.twitter.com/412PdJ67Ae

My Tweets
We use cookies to help identify your computer so we can tailor your user experience, track shopping basket contents and remember where you are in the order process. WTX News Our Cookie Policy
Daily News Briefing: 29,000 Afghan civilians killed in past decade – Trump’s speech on eve of impeachment acquittal & Beginning of the end of BBC TV license?
Katy Perry named a ‘British Asian Trust ambassador’, to the confusion of many
To Top
Weekly Community