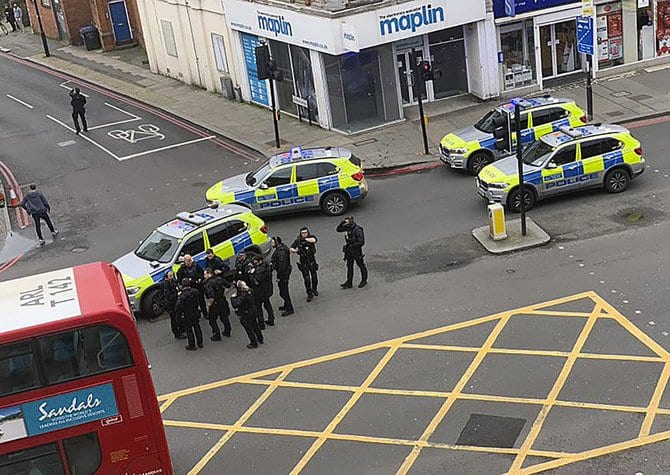 A suspected 20-year old terrorist wearing a fake suicide bomber vest was shot dead by police after stabbing two people in a “confusing and alarming” attack in the south London suburb of Streatham.

As the drama unfolded here is what we know so far about the Streatham shooting latest reports, as shoppers and diners were out shopping on the busy Streatham High Road at approximately 2 pm on Sunday afternoon.

What Happened at Streatham High Road

Sudesh Amman, 20, was released around a week ago after serving half of his sentence of three years and four months for terror offences.

He was under active police surveillance at the time of the attack on Streatham High Road, which police believe to be an extremist-related terrorist incident.

Several videos of the scene were posted on Twitter. In one, filmed from inside a shop across the road, a man can be seen lying on the street while at least two armed police officers point their guns from behind an unmarked car with its blue lights flashing.

Reports suggest Amman entered a shop and started stabbing people. It appears he then left the shop and stabbed a woman.

Witnesses reported hearing three gunshots and seeing a man lying on the ground outside a Boots pharmacy, as armed police approached and shouted at those nearby to move back.

The two stab victims, a wounded woman and a man who suffered life-threatening injuries are being treated in hospital, the Metropolitan Police said. A third person was hurt by debris from a glass after the police shooting.

Police arrived immediately on the scene, amid reports that the suspect was under surveillance having previously served a prison sentence for terrorism offences.

He was on the Police’s radar

At the time of Amman’s release, there were concerns about the danger he might pose to the public but there were no legal mechanisms to keep him in prison. Some UK news outlets named him as a 20-year-old with a history of extremist sympathies.

The Met Police said armed officers – who were part of a “proactive counter-terrorism operation” following the suspect on foot – were in “immediate attendance”.

The man had a hoax device strapped to his body, police said.

He was clearly suffering from mental health issues and has a previous history of violence.

Armed police cordoned off the area, on the main shopping street in Streatham, a busy residential district south of the River Thames. Police said people should avoid the area.

Helicopters flew overhead and police cars were in surrounding streets, with the area blocked off by tape.

My statement on today's incident in #Streatham: pic.twitter.com/sDsJlVcyNq

Prime Minister Boris Johnson said on Twitter: “Thank you to all emergency services responding to the incident in Streatham, which the police have now declared as terrorism-related.”
“My thoughts are with the injured and all those affected,” he added.

The last such incident in London was in November when police shot dead a man wearing a fake suicide vest who stabbed two people to death and wounded three more before being wrestled to the ground by bystanders. Authorities called that a terrorist attack.

The government has announced a policy review to make fundamental changes to the way prisoners released in terrorism-related offences are treated.