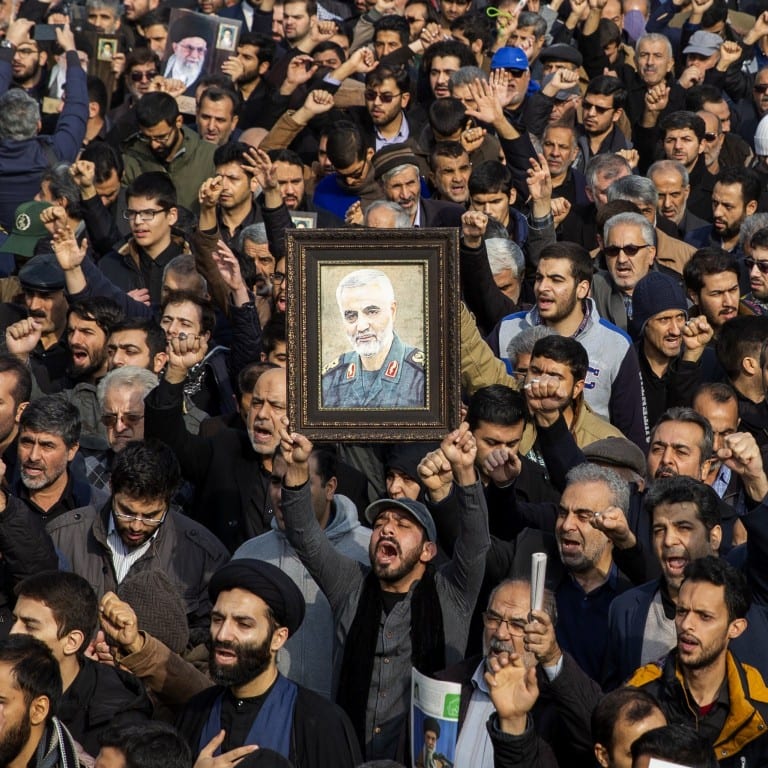 In today’s briefing update, the Sunday papers front pages focus on the fallout from Iran’s top General Soleimani’s death. A tactical move by Donald trump to focus away form the impending impeachment? or his way of creating a lasting legacy! Including the Prime Minister returning to Britain and advice for Brits in Iraq and Iran.

In our special feature, we take a look at the killing of Soleimani – “As tensions with Iran escalate, Trump opted for the most extreme measure.”

The Mail on Sunday reports Boris Johnson arrived back in Britain from his 12-day Caribbean holiday to confront the growing Iran crisis. On its front page, the paper says there is rising anger among ministers over the lack of warning from the US before its strike on the top Iranian military chief in Iraq.

Trapped in a tinderbox

The Sunday Times headline reads “Trapped in a tinderbox” as it reports British troops in Iraq will be given increased firepower to protect themselves and guard UK diplomats amid the growing threat of a revenge attack by Iran. The PM’s return to Britain, according to the paper, cannot come a moment too soon for senior officials who have “expressed incredulity” at No 10’s slow reaction to the crisis.

Read the full story on the  Times

The Sunday Telegraph reports, Defence Secretary Ben Wallace has ordered two Royal Navy warships in the Gulf to protect British-flagged vessels. The paper says the government spent most of Saturday “split between hawks and doves” and that Boris Johnson now faces “the biggest foreign policy crisis of his premiership.”

The Observer reports thousands attended the funeral procession for General Soleimani in Baghdad and Tehran. The paper says calls to avenge the top military chief’s death have mounted and the US case for his killing called into question.

The Sunday Express says “Red alert for British tourists” as it reports Foriegn Office advice for Britons in UAE and Israel to be vigilant while those in Iraq and Iran should leave immediately.

England and Wales will be mostly dry but quite cloudy. A few sunny intervals at times. Scotland and Northern Ireland will be windier and mostly cloudy with rain mostly across NW Scotland.

Tomorrow will be windy and mostly cloudy. A dry start for many but rain will move into Scotland and N Ireland in the morning and spread south-east across England and Wales in the afternoon.

I imagine @GretaThunberg hearing about Meat Loaf for the first time and having a good laugh. https://t.co/7V2XpIdu8L

With all the options on the table, why did Trump choose the most extreme?

CNN says the killing of Iran’s top General is hugely significant because he ran Iran’s military operation across the Middle East.

In 2018, the then-commander of US Central Command that oversees American military operations in the Middle East explained Soleimani’s role: “ Wherever you see Iranian activity, you see Qasem Soleimani, whether it is in Syria, whether it is in Iraq, whether it is in Yemen, he is there and it is the Quds Force, the organisation which he leads, that I think is the principal threat as we look at this and the principal ones that are stoking this destabilising activity”.

Over the past decade, Iran has conducted proxy wars across the Middle East in Iraq, Syria and Yemen and controls much of Lebanon through its proxy force – Hezbollah. Soleimani was in charge of all these operations. He also has the blood of hundreds of Americans on his hands.

Trump’s ordering of the killing of Soleimani suggests he is confident in his use of American military power.

NY Times says as tensions with Iran escalate, Trump opted for the most extreme measure.

The paper says in the chaotic days leading to the death of Soleimani, top American military officials put the option of killing him – which they viewed as the most extreme – on the menu they presented to President Trump.

But they didn’t think he would take it. In the wars since 9/11 Pentagon officials have often offered improbable options to presidents to make other possibilities more palatable.

Trump initially rejected the option on Dec 28 and authorised airstrikes on an Iranian-backed Shia militia group instead. But a few days later Trump watched, fuming, as TV reports showed the attacks on the American Embassy in Baghdad, according to Defense Department and Administration officials.

By late Thursday, Trump had opted for the most extreme option. Top Pentagon officials were stunned.

The Guardian reports Jeremy Hunt says the US confrontation with Iran over the assassination of Tehran’s top general a ‘dangerous game of chicken’.

He said: “It’s an incredibly dangerous game of chicken going on at the moment because both sides have calculated that the other side cannot afford and doesn’t want to go to war.

“So they are doing increasingly extreme things, not just the assassination of general Suleimani, but the bombing of the Saudi oil facility last September is another example of this. And of course, it is true neither side wants to go to war but it’s also true that both sides are compelled to react when things like this happen and that is the risk in the current situation.”

He adds that it is impossible to predict whether the reaction to the killing would be immediate or play out long term. He urged Britons to avoid travel to Iran, and those there to leave immediately.

He says the UK cannot afford to be neutral if the country wants to be a serious global power, but the situation is risky.

The Financial Times says Trump’s bold strike takes the US and Iran to the brink.

The killing of Soleimani will be seen not only as a military blow but tantamount to a declaration of war. The drumbeat of conflict between the US and Iran has suddenly become deafening. America’s allies are concerned, every move on the Middle East chessboard will now carry a serious risk of triggering a broader conflagration.

FT says the killing of the top general is a significant prize for the US – bigger than the 2011 killing of Osama bin Laden.

But the question is why the US opted for such a brazen escalation now, there were other responses to the round of violence, and Washington had opportunities to take Soleimani out before.

US allies would feel reassured if this was part of a clear strategy. Instead, the Trump administration has offered varying explanations. Mike Pompeo said Soleimani was planning an “imminent attack” on US lives. Yet even as he suggested Americans in the Middle East were now safer, the embassy in Baghdad urged US citizens to evacuate Iraq by any means possible.