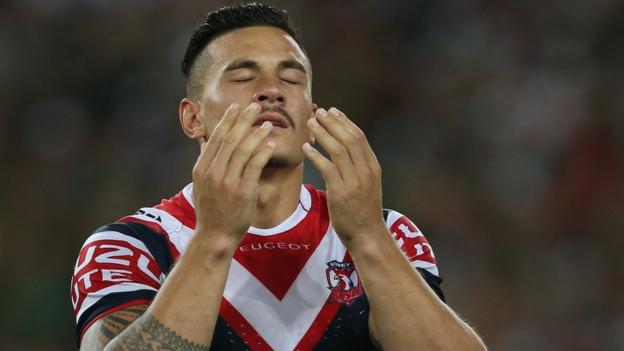 The East Turkestan arm is dripping with blood.

Sonny Bill Williams has tweeted his support of the minority Uighur ethnic group, mirroring the stance of football star Mesut Özil which drew an angry response from China.

In his tweet posted on Monday, Williams echoed the belief of Arsenal playmaker Özil, who is also a practising Muslim, that more countries should speak out against China’s reported actions of detaining Uighur people in “re-education camps”.

Williams, a Muslim convert is a New Zealand All Black star. He posted an image showing a hand-painted with the Chinese flag twisting an arm painted with the flag of East Turkestan – the term used by separatists to refer to Xinjiang.

The East Turkestan arm is dripping with blood.

It’s a sad time when we choose economic benefits over humanity#Uyghurs 😢❤️🤲🏽 pic.twitter.com/F5EIWIOY7n

His statement echoes comments made by Arsenal footballer Ozil who criticised both China – and Muslim people who stayed silent during the persecution of Uighurs.

“Korans are being burnt… Mosques are being shut down… Muslims schools are being banned… Brothers are forcefully being sent to camps,” the Muslim player tweeted in Turkish.

“The Muslims are silent. Their voice is not heard.”

Arsenal football club distanced themselves from the footballer, such is the power and dominance fo Chinese sponsorship and TV revenues from China.

The Chinese foreign ministry spokesman said he was “deceived by fake news”, and invited him to visit the region to “have a look” for himself.

Yesterday, the Hong Kong protesters stood in solidarity with Uighurs and took the protest to the streets of HongKong wearing Uighur masks and holding signs supporting them

The Uighurs are ethnically Turkic Muslims who live in western China – predominantly in the autonomous region of Xinjiang. They make up under half of the region’s roughly 26 million people.

My Tweets
We use cookies to help identify your computer so we can tailor your user experience, track shopping basket contents and remember where you are in the order process. WTX News Our Cookie Policy
Daily News Briefing: 18 dead in prison clash – Tens of thousands flee Syria & Astronaut celebrates Hannakuh from ISS
Tesco Christmas card factory denies ‘forced labour’
To Top
Weekly Community