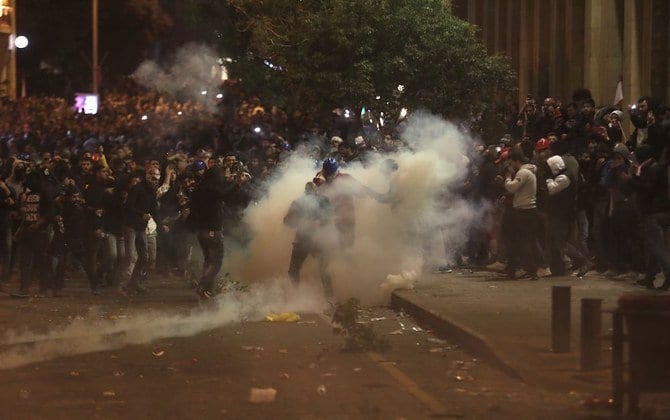 New protests in Lebanon in a 10 hour ‘Battle of Beirut’

Thousands of Lebanese protesters took to the streets again on Sunday as an official investigation began into a 10-hour battle in Beirut the previous night.

The protesters who showed up in Beirut on Sunday chanted against the security crackdown and called for an independent new head of government unaffiliated with established political parties.

The crowd assembled in its thousands, many raising Lebanese flags, said: “We won’t leave, We won’t leave. Just arrest all the protesters!”

Others raised posters saying the tear gas would not keep them away. “We are crying already … fire more tears gas, we will not leave,” said one protestor.

The streets leading to parliament were filled with men, women and children. Some huddled in smaller groups while others were lifted on shoulders chanting in megaphones.

Lebanon is facing the worst economic crisis since the 1975-1990 civil war, rooted in decades of state waste and corruption that has landed the country with one of the world’s heaviest public debt burdens.

At least 130 people were injured in the most violent crackdown on protesters since nationwide demonstrations began two months ago against government corruption and ineptitude.

Security forces fired tear gas and deployed water cannons throughout the night as downtown Beirut turned into a battleground. By morning, stones filled the streets, shop windows were broken and trees lay uprooted.

Witnesses saw masked men in civilian clothes mingling with security forces and attacking protesters. “There are parties trying to exploit the rightful protests to start a clash between the protesters and the security forces,” Interior Minister Raya El-Hassan said.

The minister said she viewed the violence “with concern, grief, and astonishment.”

“I have urged the leadership of the Internal Security Forces to conduct a quick and transparent investigation to identify those responsible,” she said.

Riot police had used tear gas and rubber-coated bullets beat and arrested protesters in an attempt to disperse rallies outside parliament in the capital overnight on Saturday.

The incident was one of the most violent crackdowns on protesters since nationwide anti-government demonstrations began two months ago, leading to the resignation of Prime Minister Saad Hariri on October 29.

Protesters want a new government of independent experts to be appointed to steer the country through its economic crisis, which they blame on policies adopted by the country’s ruling elite. The demonstrators also want early elections to be held based on a new, non-sectarian electoral law.

Sunday’s rally came just hours before the president was due to meet with representatives of parliamentary blocs to name a new prime minister. After weeks of bickering and despite calls from the protesters for a technocratic government, politicians seem set on bringing Hariri back to the post.

Saad Hariri, caretaker prime minister since he resigned in October, is the prime candidate to resume office.

New protests in Lebanon in a 10 hour ‘Battle of Beirut’

My Tweets
We use cookies to help identify your computer so we can tailor your user experience, track shopping basket contents and remember where you are in the order process. WTX News Our Cookie Policy
Pakistan Prime Minister arrives in Saudi Arabia
Police storm campuses as Protests spread through India
To Top
Weekly