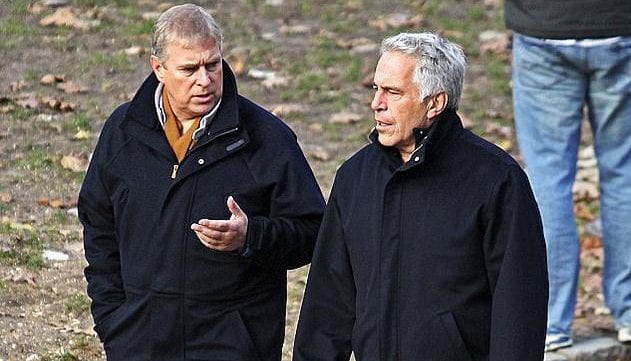 In today’s briefing update, much of the Sunday papers front pages focus is on Prince Andrew’s interview with the BBC. The Prime Minister tells the Sunday Telegraph every Tory candidate has signed a Brexit deal pledge and millions facing a threat to their pensions also feature on the Sunday front splashes. Plus, a weather warning from the Met Office.

In our special feature, we take a look at the Trump impeachment probe – ‘If he survives impeachment, it’s clear who he’ll have to thank’

I didn’t have sex with teen, I was at home after pizza party: Prince

The Observer’s front page leads with Prince Andrew’s “bombshell” interview with the BBC. The paper focuses on the Prince’s alibi which he gave when asked about the Virginia Giuffre’s claim he had sex with her when she was a teenager. Andrew said on the night of the alleged encounter he was at home. Adding on that night he had also gone to Pizza Express. Of his friendship with Jeffery Epstein, the paper describes Andrew as “sometimes rambling and contradictory.”

Not one single word of remorse

The Mail on Sunday also leads with Prince Andrew’s BBC interview. However, they focus on some of the reactions from viewers, many of whom were shocked by Andrew’s apparent “total lack of empathy” for Epstein’s victims. The paper calls the interview “disastrous” and says it left the Prince “humiliated” and that he “looked deeply uncomfortable.”

The Sunday Mirror’s front splash refers to a part of Prince Andrew’s interview where he was asked about Virginia Giuffre’s description of dancing with the prince, saying he sweated profusely. The Prince said he “couldn’t sweat” at that time because of a medical condition.

Read the full story on the Mirror

Millions face threat to their pension

The Sunday Express runs with Prince Andrew on its front page with the main points from the interview, which the paper calls “amazing.”.But the paper’s main story is on Jeremy Corbyn’s nationalisation plans which the paper says could risk private pensions.

The Sunday Telegraph leads with the general election. The paper has interviewed Boris Johnson who says every Conservative candidate has personally pledged to back his Brexit deal in the Commons. The paper says the “highly unusual decision” is designed to help convince Leave supporters that the Tories will deliver Brexit. Sharing the front page is a picture of Prince Andrew and his alibi.

The Daily Star on Sunday’s front page leads with the Met Office’s forecast of more rain. The Met Office warns of “flood chaos” over the Christmas period. And the weather experts have told emergency services and councils to prepare for more rain than normal over the coming months.

A bright but chilly start this morning with early sunny spells. Through the day, cloud will tend to come and go. LA few showers are also possible, especially later on.

Often cloudy tonight with a few showers at times. A few clear spells may develop towards dawn. Winds staying light.

“The stuff that dreams are made of.” The Maltese Falcon, 1941

Trump - 'If he survives impeachment, it's clear who he'll have to thank'

In today’s special feature we look at President Trump’s impeachment probe – ‘If he survives impeachment, it’s clear who he’ll have to thank’

The New Yorker says a bad week for Trump just got worse. The President addressed the White House press corps on Friday afternoon about the impeachment hearings. Trump didn’t hide his fury. “The Republicans are given no due process whatsoever,” he said. “We’re not allowed to do anything… In the history of our country, there has never been a disgrace like what’s going on right now.”

The New Yorker says the question that set Trump off was about a tweet he sent, in which he attacked Marie Yovanovich, who was testifying before the committee. In the tweet, he wrote that everywhere Yovanovich had been posted “turned bad”.

But Friday would continue to get worse for Trump. Later in the day, in a closed-door meeting, the impeachment committee heard testimony from David Holmes. Mr Holmes testified that this past summer, he overheard a transatlantic phone call in which Trump asked the U.S Ambassador to the EU whether the Ukrainian President was going to go ahead with the investigations Trump demanded.

The Guardian says the president’s abuse of power looks as bad as Watergate, but so far he’s enjoyed the privilege of the age: impunity. The paper says Trump winning the election in the first place was the first proof he enjoys a rare form of impunity. Despite all the scandals and revelations that could have destroyed other candidates, Trump not only survived it but won office.

Three years on Trump’s impunity is being tested again, with the launch this week of the public phase of the House intelligence committee’s impeachment inquiry.

The Democrats have laid out what should be a slam-dunk case for the removal of a president. Americans have known since September that Trump withheld foriegn aid from Ukraine as he pressured its president to reveal or make-up dirt on Trump’s 2020 opponent, Joe Biden.

However you look at it, the White House’s own account reveals abuse of power which is as clear cut as Watergate. On Friday, Trump added to the charge sheet intimidating a witness via tweet at the very moment she was testifying she felt threatened by him. And just like Watergate, Trump aides hid the “transcript” on a top-secret server, where it would have stayed undiscovered if it had not been for a whistleblower.

CNN looks at Fox News and their coverage of Trump’s impeachment. And why Fox wants you to think the impeachment hearings are “boring”. On Wednesday night Sean Hannity (who has a prime-time show on Fox News) was giddy. Hannity declared it had been “a great day for the United States, for the country, the President. A lousy day for the corrupt, do-nothing for three years radical, extreme, socialist Democrats and their top allies known as the media mob.”

Hannity was celebrating because he claimed, the public hearings on impeachment were so boring. And he wasn’t the only right-winger to claim the hearings were boring.

CNN says the “boring” charge is less surprising if we think of it as part of a broader strategy to discredit and devalue the hearings. They say for decades right-wing media consumers have learned that sources they’d consider trustworthy roll out their ideology in slick trappings with bombastic claims.

This is why, CNN says, the boring charge is not solely a claim for entertainment. It tells the viewer who they should trust and those they should view with suspicion — a lesson that helps explain why a huckster like Trump has done so well with conservative voters.

My Tweets
We use cookies to help identify your computer so we can tailor your user experience, track shopping basket contents and remember where you are in the order process. WTX News Our Cookie Policy
VIDEO: A weekly roundup of the headlines from the last 7 days!
Daily News Briefing: A daily roundup of all the news headlines that you need to know!
To Top
Weekly