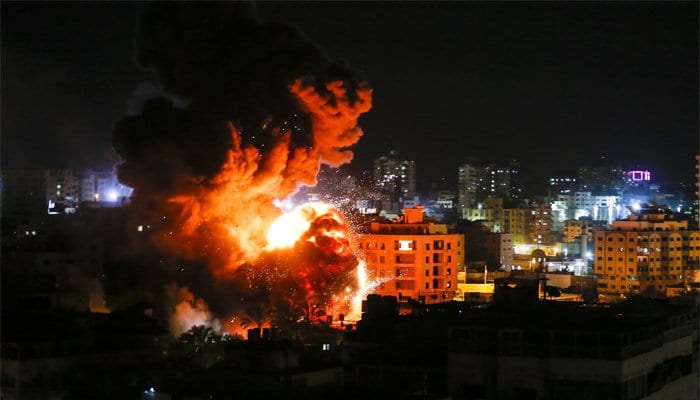 Israel carries out fresh strikes on Gaza after rocket fire

Israel carried out fresh strikes on Gaza targeting Hamas early on Saturday morning in response to ‘unverified’ rockets which the army allege were fired from the Palestinian enclave, despite a ceasefire that began two days ago.

Unlike earlier operations, the army said the strikes did not target Islamic Jihad, but Hamas, which has de facto control over Gaza and so far has kept out of the violence that erupted this week.

“Two rockets were fired from the Gaza Strip towards Israeli territory” and were intercepted by air defences, the Israel Defence Forces (IDF) said.

The army added that it was “currently striking Hamas terror targets” in Gaza.

Palestinian security sources said the Israeli strikes were aimed at two Hamas sites in the north of the territory.

On Tuesday, Israel carried out an operation that killed a top commander of Islamic Jihad, the second most powerful Palestinian militant group in the Gaza Strip after Hamas.

In the bombing, a medic said eight members of one family died in the strike, among them were five children.

Israel said the attack targeted the home of Rasmi Abu Malhous, who it called a militant commander from the group Palestinian Islamic Jihad (PIJ).

It said no civilians were expected to be in harm’s way. However, Israel’s military has said it is investigating “harm caused to civilians” from an airstrike it launched in Gaza.

After two days of violence, which left 34 Palestinians dead in exchanges of fire, with no Israeli casualties, a ceasefire was agreed that was put in place on Thursday morning.

But the ceasefire has so far been precarious, with Israel launching fresh airstrikes on Gaza and rocket fire coming from the enclave after it went into effect.

What caused the fighting?

Fighting flared after Israel killed a PIJ commander in the early hours of Tuesday.

Israeli Army launched a staunch attack in Gaza on Tuesday. At the end of this last military assault on Gaza, the Israeli government declared triumphantly that it had carried out “surgical strikes” in Gaza and had killed “terrorists”.

Israel said the commander, Baha Abu al-Ata, was a “ticking bomb” who was behind a planned imminent attack and responsible for recent rocket fire from Gaza. And the attack was justified as Israel has a right to defend itself.

In response to some 450 rockets and mortars were fired at Israel, and several waves of airstrikes carried out on Gaza in two days of violence.

As of Friday morning, Israel’s “surgical strikes” have killed a total of 34 Palestinians, almost half of them civilians, including eight children and three women.

Islamic Jihad did not comment on whether Abu Malhous was a member of the group but did confirm that 115 Palestinians were injured in the attack and 34 confirmed deaths.

Two million Palestinians living in Gaza are a major demographic menace for Israel, so they are kept in subhuman conditions and bombed occasionally.

The water in Gaza by now is undrinkable. Contaminated and scarce, owing to Israel’s brutal siege and the bombing of infrastructure, it is causing death and disease.

Israel carries out fresh strikes on Gaza after rocket fire