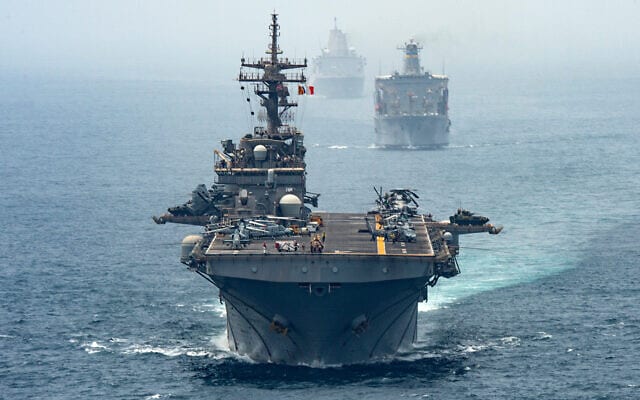 A US-led naval coalition officially launched operations in Bahrain to protect shipping in the troubled waters in the Gulf, after a string of attacks that Washington and its allies have blamed on Iran.

The Navy has carried out the order of its commander in chief to counter Iran in the Middle East but in the least provocative way.

The coalition, aimed at warding off the perceived threat to the world’s oil supply, has been in the making since June. A tit for tat of impounding Irnainian and British oil tankers threatened to escalate the situation until the investigation found little evidence to support its theories.

Iran has repeatedly denied any responsibility for the mystery attacks and has put forward its own proposals for boosting Gulf security that pointedly excludes outside powers.

In an attempt to boost relations with its southern neighbour Iran and build on relations with Said Arabia, Pakistani Prime Minister Imran Khan has tried to mediate between the Saudi-US coalition aimed at dismantling Iran.

Australia and Britain are the main Western countries to have agreed to send warships to escort Gulf shipping. The newest member, Albania, who receives funding from the US and Saudi Arabia also joined the coalition on Friday.

The purpose is to provide a safe route for vessels which will be escorted through the Strait of Hormuz, the strategic chokepoint at the head of the Gulf and the main artery for the transport of Middle East oil.

In August, The navy dispatched HMS Duncan, a type 45 frigate, sailed from Britain on August 12, alongside HMS Kent, which was also heading to the Gulf to replace the HMS Duncan.

Navy Suicide in the Straits of Hormuz

Political analysts in the region have suggested that the US-led coalition is attempting to choke Iran with the military might of the coalition.

Some Middle Eastern political specialists have gone as far as saying the coalition is preparing to launch a ‘shock and awe’ attack on Iran, similar to the one that started the Iraq war.

No navy warships would voluntarily sacrifice their position and enter the Strait of Hormuz without strategic placements on the ground and air around it. In military terms, it is a bottle kneck that increases the risk significantly to the ships.

US Vice Admiral Jim Malloy, commander of US Naval Forces in the Middle East, said Operation Sentinel is a defensive measure aimed at protecting Gulf waters.

“While Sentinel’s operational design is threat-based, it does not threaten,” he said during a ceremony at the IMSC’s command centre.

“We employ capable warships on patrol, but there is no offensive line of effort in this construct, other than a commitment to defend each other if attacked.

“Our commitment to the region isn’t short-lived, it is enduring, and we will operate as part of Sentinel for as long as it’s needed — as long as the threat looms.”

Most European governments have declined to participate in the naval coalition, fearful of undermining their efforts to save a landmark 2015 nuclear accord with Iran, which was badly weakened by Washington’s withdrawal last year.