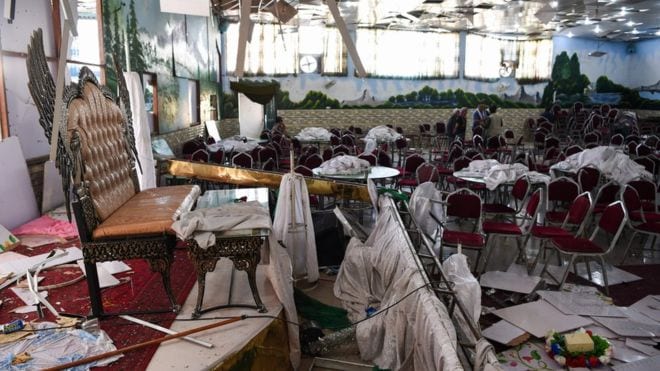 My heart is breaking for the families of those who lost loved ones at an Afghan wedding in the capital over the weekend.

The sooner peace talks between the Taliban, the Afghan government and the US are resolved the better.

What should have been a joyous occasion for a young couple on their wedding day turned into carnage when a bomb exploded inside a large banqueting hall killing 63 guests and injuring 180 others.

Daesh says it was behind the suicide attack and I have to wonder how on earth that vile group of criminals has managed to thrive and get a foothold in war-torn Afghanistan.

The Taliban now controls more territory in the country than since they were forced from power in 2001 and it is fair to say they have no affinity at all for Daesh. When I last visited Kabul I was told the Taliban had control of three sides of the capital.

Burials are taking place today as I write this. Both President Ashraf Ghani and the Taliban have condemned the attack, so at least they agree on something and that is a mutual hatred for the so-called Islamic State.

A statement from ISIS or Daesh said that one of its fighters blew himself up at a “large gathering” while others “detonated a parked explosives-laden vehicle” when emergency services arrived.

These are the hallmarks of a cowardly bunch of criminals who are so far removed from the great faith of Islam.

The suicide bomb and attack happened on Saturday evening in the west of Kabul which is mostly populated by the Shia community.

Taliban spokesman Zabiullah Mujaheed said the group “strongly condemned” the attack adding in his text message to the media: “There is no justification for such deliberate and brutal killings and targeting of women and children.”

Optimism is high that the Taliban and the US, which has thousands of soldiers stationed in the country, will soon reach a peace deal. Both sides are holding peace talks in Doha, Qatar.

The deal will almost certainly include US troop withdrawals while the Taliban will have been asked to make sure terror groups will not be able to operate within Afghanistan.

Once a deal is reached with the US, the Taliban are then expected to open negotiations with the Afghan government.

What a pity it has taken America so long to realise that jaw-jaw is better than war-war. Ever since the first US cruise missile landed in Afghanistan on October 7, 2001, signalling the start of George W Bush’s futile war tens of thousands of innocent lives have perished.