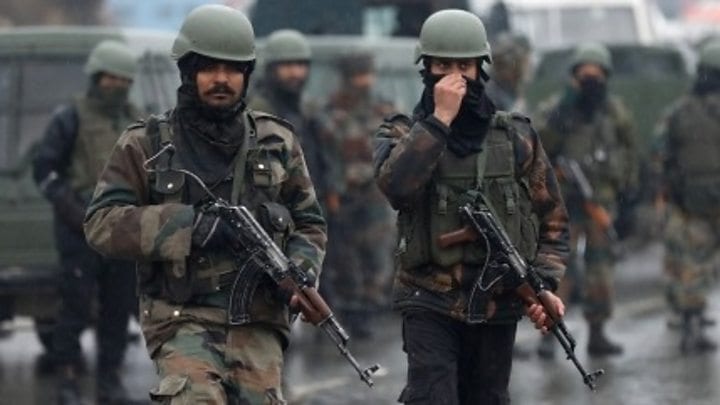 Tensions rise in Kashmir as India deploys 10,000 Battle-ready troops to the region

Two decades after the two nuclear-armed neighbours fought in the hills of Kashmir, the disputed region continues to be on edge.

This week tensions rose again after India deployed 10,000 troops to Indian-administered Kashmir on Sunday over the weekend.

India maintains a deployment of 500,000 soldiers in the Muslim-majority Himalayan region, which has been divided between Pakistan and India since their split in 1947.

The region has seen a resurgence of hostilities in recent years, while locals are fearful about the loss of special privileges after India’s Supreme Court last year began hearing a case challenging a constitutional provision.

Officials said the movement of troops was set to rise to 20,000, which Indian authorities say was to relieve exhausted personnel deployed since local civic polls last year and the new fresh troops will be placed to monitor the upcoming annual Hindu pilgrimage.

Last week the US President Donald Trump said Indian Prime Minister Narendra Modi asked him to mediate on the decades-long Kashmir dispute with Pakistan, a claim rejected by New Delhi.

The US President recalled the conversation where he suggested Modi said, ‘Would you like to be a mediator or arbitrator?’ I said, ‘Where?’ He said, ‘Kashmir.’ Because this has been going on for many, many years,” Trump said at the White House, where he was hosting Pakistan’s Prime Minister Imran Khan on Monday.

The Himalayan territory of Kashmir has been divided between Hindu-majority India and Muslim-majority Pakistan since the two countries gained independence from British rule in 1947.

Both India and Pakistan claim Kashmir in full, resulting in a 70-year standoff and turning the region into one of the world’s most militarized zones.

Tensions rise in Kashmir as India deploys 10,000 Battle-ready troops to the region