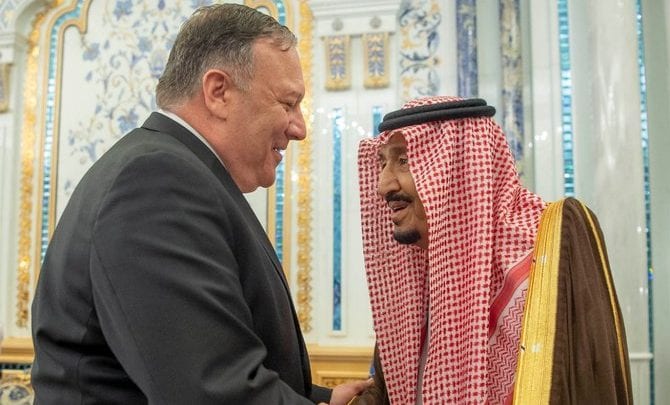 King Salman meets Pompeo amid US-Iran tensions. In a bid the US wants to build a global coalition against Iran and not make the same mistakes as it did in the Iraq war.

Pompeo is also expected to meet Crown Prince Mohammed bin Salman, before flying for talks in the UAE, US officials said.

Saudi, UK and US media are leading the propaganda war against Iran, But many European and Far east reports suggest that the USA is acting as the aggressor. And most of the accusations levied against the Iranian republic are exaggerated.

European news agencies report that the US has been responsible for arming the Houthi’s not the Iranians.

The Western-backed Sunni Muslim coalition led by Saudi Arabia and the United Arab Emirates intervened in Yemen in 2015 to try to restore the internationally recognised government that was ousted from power in Sanaa by the Houthi’s in late 2014.

The tensions have been mounting since Trump last year withdrew the US from a global nuclear deal with Iran and began pressuring Tehran with economic sanctions. A fresh round of Iran sanctions is to be announced Monday in a bid to force the Iranian leadership into talks.

But he also described the US Middle East peace plan as “shameful” and “doomed to failure,” and accused the UK, weakened because of Brexit failure, of siding with the Americans against Tehran, in hope of a positive trade deal with the US.

It was a week of topsy-turvy statement’s on US policy towards Iran. Trump initially said Iran had made a “very big mistake” But Trump also said over the weekend that he appreciated Iran’s decision to not shoot down a manned US spy plane, and he opined about eventually becoming Iran’s “best friend” if Tehran ultimately agrees to abandon its drive to build nuclear weapons and he helps the country turn around its crippled economy.

Throughout the recent crisis, Trump has wavered between bellicose language and actions toward Iran and a more accommodating tone, a tone that is often dictated by Israel.

The escalation in violence threatens a U.N.-sponsored deal for a ceasefire and troop withdrawal from Hodeidah, which became the focus of the war last year when the coalition tried to seize the port, the Houthi’s main supply line and a lifeline for millions of Yemenis.