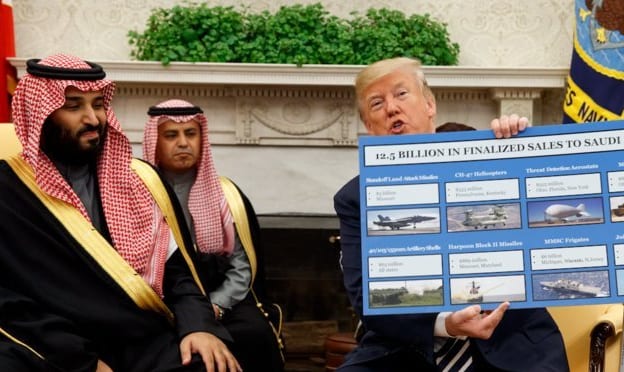 Washington blames Tehran for the attack.

US Secretary of State Mike Pompeo vowed that the US will guarantee free passage through the vital Strait of Hormuz, as he accused Iran of recent attacks on oil tankers and the downing of a US drone, for disrupting Gulf energy supplies.

Pompeo confirmed in an interview with CBS that a US MQ-9 “Reaper” drone was shot down on June 6 with a missile fired from Yemen “that we assess had Iranian assistance”.

Pompeo would not be drawn into what options the US is considering to punish Iran but – with all the naval and military movement in the region, some form of retaliation is imminent. In the wake of Thursday’s attacks on two tankers in the Gulf of Oman.

The US has been turning up the pressure on its alias to create support the ‘next move’ but so far has not been able to sell the evidence. The accusations of the tanker attacks have been denied by the Iranians and the Japanese minister, which has left the response of the international community as flakey at best.

The Secretary of State did say the US will take all necessary actions — “diplomatic and otherwise”, to increase the pressure on Iran from, US Secretary of State Mike Pompeo warned to go to all lengths to protect straits of Hormuz.

Instead, the Secretary of State focussed on the Saudi regime, who is prepared to do the United States bidding. He said that the Saudi Crown Prince Mohammed bin Salman said the Kingdom would “not hesitate in dealing with any threat against our people, sovereignty and vital interests.”

Crown Prince Mohammed said the Kingdom’s hand was always extended for peace, but the Iranian regime had disrespected the Japanese Prime Minister Shinzo Abe during his visit to Tehran by attacking the two oil tankers in the Gulf, one of which was Japanese. An accusation that the Japenese have denied.

The Saudi crown prince, in an interview with the Arabic-language newspaper Asharq Al-Awsat, said the Kingdom had “supported the re-imposition of US sanctions on Iran out of our belief that the international community needed to take a decisive stance against Iran.”

He hoped the Iranian regime “would opt to become a normal state and cease its hostile policy.”

Pompeo said the US and Saudi were discussing a possible international response, and he had made a number of calls to foreign officials about the tanker attacks.

He said China, Japan, South Korea and Indonesia relied heavily on freedom of navigation through the strait and it was the responsibility of the United States to protect the region.

Japan is one of Iran’s largest trading partners and has good ties with the Iranian regime.

On Monday more than 300 government, investment and industry leaders took part in a high-level gathering aimed at further boosting business opportunities between Saudi Arabia and Japan which some industry experts have described as a way of ‘warming the Japanese’ to the idea of war.