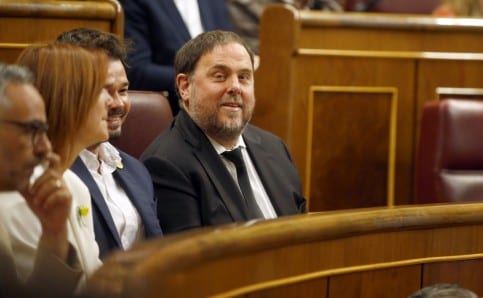 Carlos Puigdemont called it “shameful and an injustice.”

Spain’s Supreme Court blocked Catalan separatist Oriol Junqueras from leaving his jail cell to begin the process of joining the EU parliament by collecting credentials as a newly elected member.

All MEP-elects have to attend Spain’s Congress on June 17 in order to swear an oath to the constitution, a mandatory step to be able to officially become a member of the EU parliament.

Yet on Friday morning, the Supreme Court refused to allow Junqueras out of jail to attend the event.

Last month, the same judges gave Junqueras temporary permission to leave prison so that he could become an MP in Spain’s Congress – he attended the chamber’s opening session of the term on May 21.

Junqueras is awaiting a verdict after being charged with rebellion, sedition, and the misuse of public funds for his role in the 2017 referendum and declaration of independence in Catalonia. He denies any wrongdoing.

The court said he must remain in jail until there is a verdict. The verdict is expected to come after the summer.

“If he goes to Brussels, the Supreme Court says that it’s going to lose jurisdictional control over him and this means it would be an irreversible danger to the outcome of the trial,” Euronews’ deputy editor-in-chief Javier Villagarcia told Euronews Tonight.

Two other Catalan politicians won seats in the EU parliament but have not been able to collect their credentials. Toni Comin and Carles Puigdemont are in self-imposed exile in Brussels but would have to travel to Madrid to get their MEP papers.

One of the first to react to the decision of the judges was Carlos Puigdemont, who on Twitter called it “shameful and an injustice.”

The former president also claimed the decision “is a brazen demonstration of the arbitrariness and manipulation of the judiciary with the aim of altering the election results.”