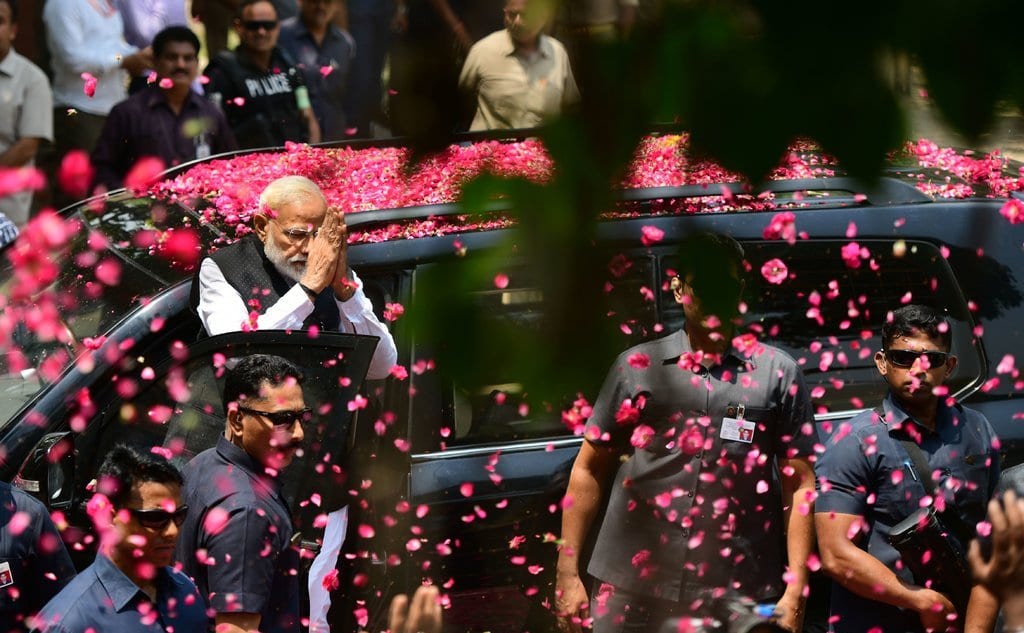 Voting ended Sunday in India´s most acrimonious election in decades –

Voting ended Sunday in India´s most acrimonious election in decades that will decide who will get elected in the worlds largest democracy.

Current Indian Prime Minister Narendra Modi is likely to return to power with an even bigger majority in parliament after a mammoth general election that ended on Sunday, exit polls showed, a far better showing than expected in recent weeks.

As the final polling booths closed and the evident animosity has taken a toll on voters. A huge security cordon was thrown around the voting machines and boxes of paper ballots used for the world´s biggest election before the official count starts on Thursday.

Most of the early exit polls released by Indian media predicted that Modi´s right-wing Bharatiya Janata Party (BJP) will lose seats but with allies would still secure a majority of the 542 seats fought.

The opposition Congress party was predicted to more than double its 2014 tally of 42 seats. The polls have in the past been notoriously unreliable, however, adding to the political jitters.

Tens of thousands of police and paramilitaries were on duty in West Bengal state — a symbol of the mounting tensions between the BJP and opposition parties during the six weeks of voting that has focused on Modi´s record since his landslide win five years ago.

Long queues formed outside polling stations across the eastern state but the BJP and its rivals again accused each other of using violence, fraud and intimidation.

An improvised bomb was thrown at one Kolkata polling station and security forces intervened to stop BJP, communist and other groups blocking different booths across the state capital that was hit by two days of street battles last week.

Modi´s constituency in Varanasi, the Hindu holy city in northern Uttar Pradesh state, was also among those to vote.

Most attention has focused on the BJP campaign to project Modi´s strongman image, playing up recent cross-border air strikes.

The opposition, led by Congress and its leader Rahul Gandhi, have accused him of pursuing divisive policies, neglecting the economy and leaving many farmers in ruin.

Modi and Gandhi have hurled near daily insults at each other with the prime minister calling his rival a “fool” while Gandhi derides Modi as a “thief”.

The Delhi-based Centre for Media Studies estimates that the outlay on this election could top $7 billion, making it one of the priciest contests globally — with the lion´s share of the spending by the BJP trying to woo India´s 900 million eligible voters.

Lots of it has been spent on social media, with the parties using armies of “cyber warriors” to bombard India´s hundreds of millions of Facebook and WhatsApp users with messages.

Fake news and doctored images have abounded, including of Gandhi and Modi having lunch with Imran Khan, prime minister of Pakistan, or of a drunk Priyanka Gandhi, a politician and the sister of Rahul.

Modi faced criticism early on in the campaign for failing to create jobs and for weak farm prices, and analysts, as well as politicians, said the election race was tightening with the main opposition Congress party gaining ground.

But he rallied his Hindu nationalist base and turned the campaign into a fight for national security after tensions rose with Pakistan and attacked his main rival for being soft on the country’s main adversary.

Official results will be confirmed after Thursday’s count.