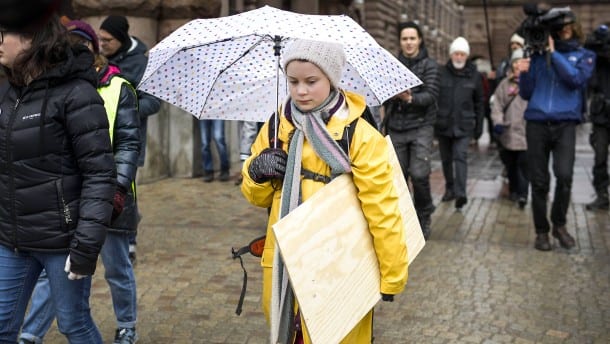 I’m still reeling over the number of misogynistic, dull, white, middle-aged privileged men who’ve lined up to use Swedish schoolgirl Greta Thunberg as a political punchbag over her heroic, eloquent and erudite activism to save the planet.

Head of the queue was Toby Young, the 55-year-old son of a baron who over a three day period on Twitter attacked Greta for not wanting our beautiful world to burn.

On one occasion, the oaf attacked what he saw as her privilege without an ounce of irony even though his own dad paid for Toby’s place at Oxford University.

Greta is a Nobel Peace Prize nominee who engaged British MPs fluently in another language about climate change facts.

Next up was Brendan O’Neill, editor of Spiked Online, and frankly I was surprised at his words. The former choir boy pulled together a really vicious article in which he named her a ‘millenarian weirdo’.

Now while I’ve had worse thrown at me, I’m a tough old Geordie lass who has had bigger boys than O’Neill and Young for breakfast. But for these middle-aged misogynists to attack a school girl is beyond comprehension.

Is their hate inspired by some sort of bitter, middle-aged jealousy which afflicts men who go off the boil when confronted by someone who exposes their own fragile egos failings and shortcomings?

Greta first captivated the world by launching the hashtag #FridaysForFuture and starting a global movement. She staged a strike outside the Swedish parliament in August 2018 and within three months the movement had gone viral with many strikes being held across Europe.

She has motivated millions talking about climate change yet all O’Neill could write about was a teen suffering from Aspergers talking on national television in a monotone voice! Brendan, how many languages can you speak and to what use? When did you last motivate millions?

Next up was the man child Boris Johnson, an adulterous serial liar who had the temerity to ask why on earth Greta was talking about climate change and he even added that he’s “sick” of hearing the opinions of those concerned about the environment. It was bloody Earth Day you superfluous maggot!

And then we had several rants from Toby Young who seemed more concerned that we were all listening to the  “privileged daughter of Sweden’s Eurovision Star” rather, no doubt than him. Do they come more privileged, I wonder? He was admitted to Oxford University despite failing to make the required grades, after his father, Lord Young, pulled a few strings and made a discreet phone call to an old chum!

In many ways, these greasy little men had the same impact as a one-legged jester in an arse-kicking competition!

High time they were consigned to the recycling bin.