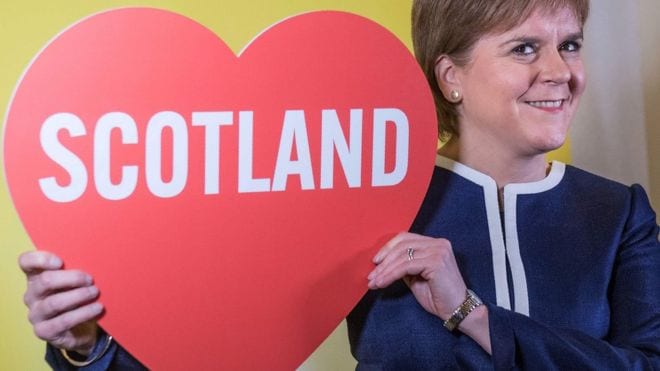 Sturgeon baits May over independence

Scotland’s First Minister Nicola Sturgeon is not a woman to mince her words and as most of you who follow my column know, I’m a big fan of hers as well as a believer in straight talk.

Therefore I was delighted when she said she didn’t expect Theresa May would refuse a second Scottish independence referendum if it is called … because she won’t be Prime Minister for much longer!

She was responding to a question on a BBC podcast when asked what she would do if Westminster refused a second referendum.

The thing is I reckon we’re heading for a General Election this year (despite what it will do to poor Brenda from Bristol) but the Tories are sunk which will leave Labour with a shot at Number 10.

However, since I also reckon that Jeremy Corbyn will not take the keys unless he enters into a coalition with the SNP, the question of independence will arise.

The canny DUP squeezed more than a billion pounds out of Theresa May. And while many of us regard freedom for Scotland as priceless, I doubt it will cost a Corbyn government one penny. Good times ahead, inshallah as we Muslim say!