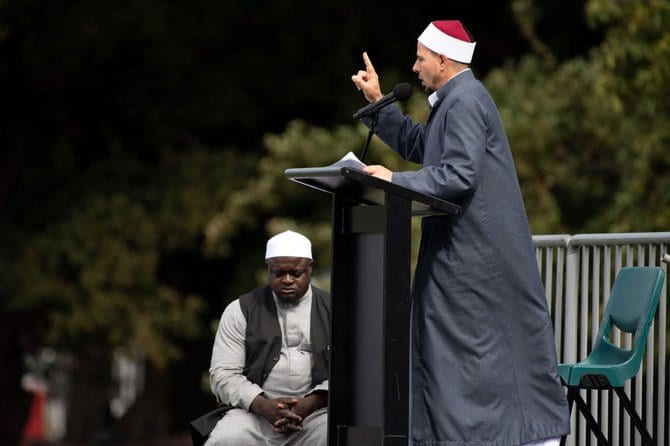 New Zealand Prime Minister Jacinda Ardern led thousands of mourners gathered at a park in front of the Al Noor Mosque, where most of the victims died, for a prayer followed by two minutes of silence.

The Azaan, The Muslim call to prayer, was heard across New Zealand on Friday, as thousands gathered to remember the 50 people martyred by a lone gunman at two mosques a week ago.

The Imam, Gamal Fouda of Masjid Al Noor, who survived the attack last week, has led the first Jummah prayer in Christchurch since the mosque shootings last Friday.

“Last Friday, I stood in this mosque behind us and saw the hatred and rage in the eyes of a terrorist, who killed and martyred 50 innocent people, wounded 42 and broke the hearts of millions around the world. Today, from the same place, I look out and I see the love and compassion,” Fouda said.

“The terrorist tried to tear us apart with evil, but New Zealand is unbreakable.”
Fouda warned against the “evil ideology of white supremacy” saying it was a threat to mankind globally.

He called on governments and leaders around the world to bring an end to hate speech and the politics of fear.

Tens of thousands of people attended the Jummah prayer in a show of solidarity with the 50 victims of the shootings at two mosques in the city exactly a week ago.

The prime minister was accompanied in the Christchurch prayers with community leaders and other foreign dignitaries.

The Azaan was broadcasted nationally across all free-to-air TV and radio stations.

Fouda said the world should look to New Zealand as an example of how to respond to right-wing extremism and terrorist attacks.

“The world can see in us an example of love and unity. We are broken-hearted but we are not broken. We are alive. We are together. We are determined to not let anyone divide us.”

Fouda thanked the public, the police and not least, the country’s prime minister Jacinda Ardern.

To our prime minister, thank you. Thank you for your leadership. It has been a lesson for the world’s leaders. Thank you for honouring us with a simple scarf,” he said.

The imam’s words were punctuated throughout by spontaneous applause from the large crowd.

Newspapers across the country ran full-page memorials with the names of the victims, and a call for national mourning.

Armed police have been guarding mosques around New Zealand since the attacks. Police said there would be a “heightened presence” on Friday to reassure those attending weekly prayers.

Candlelight vigils continued until late on Thursday across the country, while government officials worked through the night to prepare the mosque and the bodies of the deceased for a mass burial that expected after the prayers.

Twenty-eight people wounded in the attacks remain in hospital, six in intensive care.