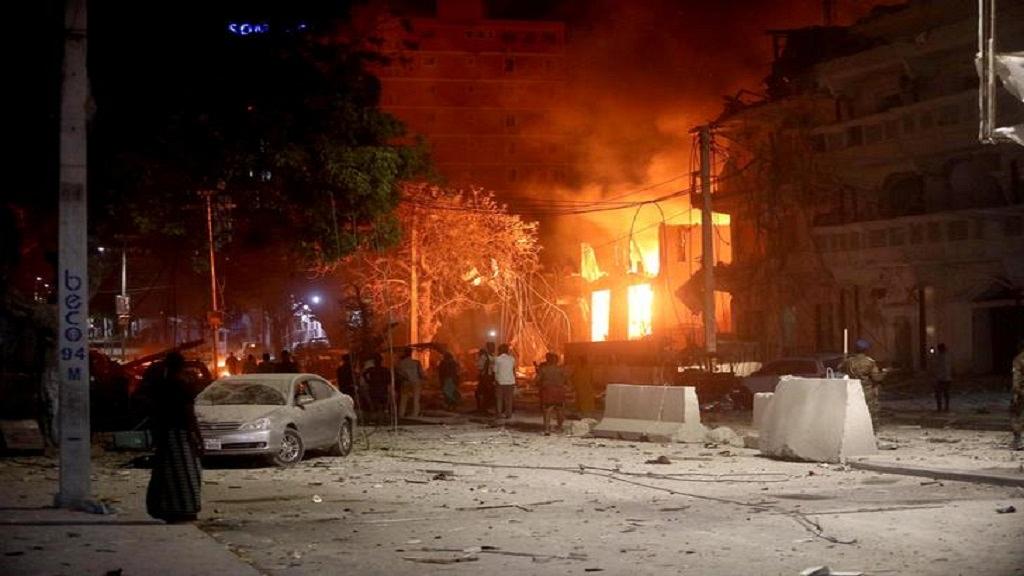 A suicide car bomb has gone off in Mogadishu, targeting a hotel killing at least 13 people and destroyed buildings in the Somali capital’s busiest street. Followed by a second bomb which killed a few more.

The first deadly attack was huge and was carried out by the extremist group Al-Shabaab on Thursday, in a business centre in Maka Al Mukaram street which has hotels, shops and restaurants.

It was one of the heaviest blasts to have hit Mogadishu in recent times. Al Shabaab claimed responsibility for the attack.

Then the second bomb went off, An hour after the first. The second attack took place outside an area called Nasa Hablod 1 close to the famed K4 junction.

This is whilst Al Shabab fighters are still in the hotel, firing indiscriminately and resisting the police.

The hotel is burning and surrounding buildings were destroyed by the blast. Over twenty injured people and have been carried out. According to reports, from the ground, more dead bodies are buried in the ruined buildings and the death toll will rise.

The blast has destroyed electric wires and power in the area has gone off. The police and emergency services are working in the dark while trying to diffuse the situation and take control of the burning building. Which according to a spokesperson of Alshabab is still occupied by the militants.

Blast debris and stinking gases from the blast reached several kilometres away from the scene.

A journalist on the ground refers to the situation as a complex attack because of the heavy exchange of gunfire and grenade explosions inside the Maka Al-Mukarama hotel. Other survivors are tweeting how they managed to escape the blast zone.

We were so lucky to survive the huge blast this evening in #Mogadishu. I and my colleague HM Dahir were sitting down in Maka Almukarama hotel .We first heard gunfire followed by a very demolishing blast The scene changed into darkness.Heavy smoke went high. More bodies were scene pic.twitter.com/JXxn9NdwBK