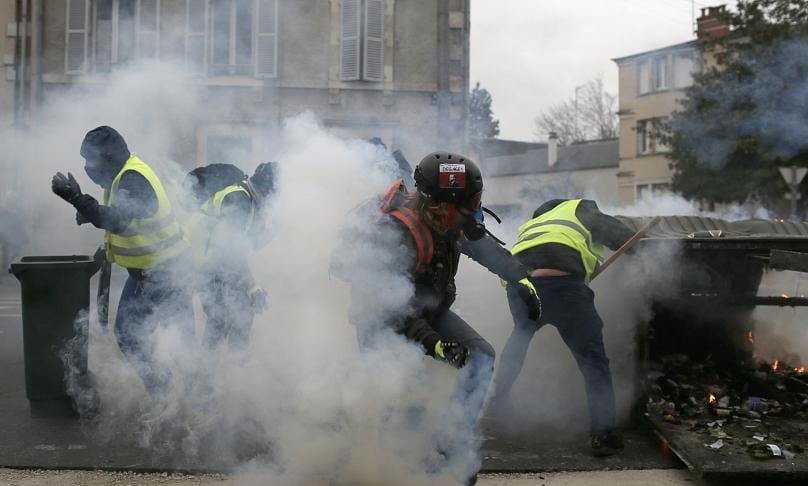 Paris police fired water cannons and tear gas to repel “gilets jaunes” or “yellow vests” protestors around the Arc de Triomphe as scuffles broke out between police and protesters.

Police placed a car ban on the nearby Champs-Élysées avenue to avoid further escalation of violence.

Saturday marked “Act 9” or the ninth day of national action for the “gilets jaunes”. The citizen movement was first created as a protest against a planned fuel tax rise but mutated into a crisis about inequality and spending power.

Tighter security following the explosion in Paris and a more aggressive approach by the police did not deter the thousands who turned up in their droves to protest against the French administration and specifically, President Macron. They see him as the person driving the reforms to appease the rich in the country.

#Paris Use of tear gas and water cannon on #GiletsJaunes in front of Arc De Triomphe #Acte9 #Yellowvests #ActeIX pic.twitter.com/n0lKcll6Lz

The Interior Ministry estimated that there was a maximum of about 84,000, sources on the ground across France suggest that the actual figure was closer to 100,000.

Demonstrators nationwide on Saturday increased dramatically almost more than double the 50,000 counted last week, but well below the record 282,000 estimated on 17 November when the protests began.

The French president is determined to ride the storm and a poll by the French Institute of Public Opinion for French media Sud Radio and Paris Match showed Macron’s score improved to 28 percent, up by five percentage points from December.

“The poll conducted after the latest announcements of Emmanuel Macron in response to the ‘yellow vest’ crisis shows a rebound in the approval of the president’s action, the best increase observed since November 2017,” the pollster said.

However, more than two-thirds of the 1,014 people interviewed still thought the ex-investment banker’s economic policy was not good, and only 19 percent believed he understood voters’ concerns.

The “yellow vest” movement mobilized through social media has forced Macron to reconsider his economic and social recipe for the eurozone’s No.2 power by offering a series of concessions to appease angry citizens.

After weeks of violent protests that plunged Paris into its worst chaos in decades, Macron capitulated last month over an original plan to raise fuel taxes, his major U-turn since taking office 20 months ago.

Offering more sweeteners, he pledged to increase the minimum wage without bringing extra costs to employers, in addition to a tax-free status of overtime hours, tax cuts for pensioners and end-of-year bonuses offered to workers.

Despite the hardened stance, the French government has struggled to contain the movement which has no leadership structure and is not affiliated to any political party or trade unions, making negotiations all but impossible.