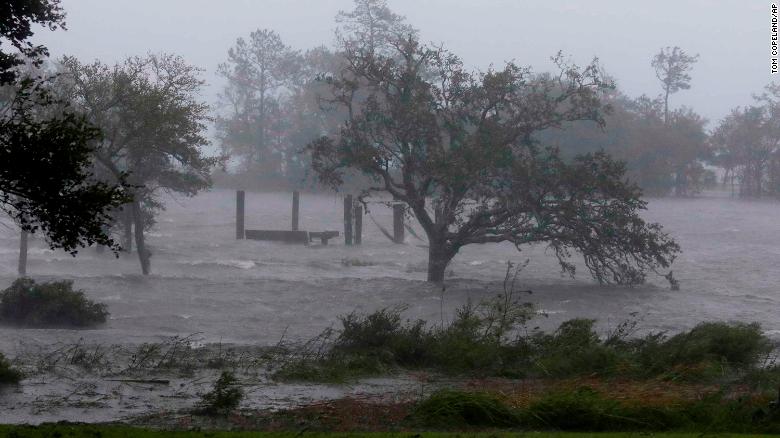 Evacuation warnings were issued for 1.7 million people in the region. – So far 5 people have been killed. #Carolina #StormFlorence

At least five people, including a mother and her infant, have died in North Carolina as Tropical Storm Florence rips through the east coast and moves from the Tar Heel State into South Carolina, officials said Friday.

It has been downgraded from a hurricane to a tropical storm but continues to soak the East Coast area with rain, downing trees and damaging homes.

It is slowly grinding over the eastern states, with winds of 65mph. Five deaths have been linked to the storm and thousands of people have been staying in emergency shelters. Evacuation warnings were issued for 1.7 million people in the region.

However despite that declassification 5 people have been killed so far, and the death toll is expected to rise.

Of the 5 deaths announced so far a young mother and her infant were killed when a tree fell on their home on Friday. The child’s father was also transported to hospital for injuries.

Two men in their 70s were also killed in Lenoir County. One was killed when connecting an electrical generator. A woman died from cardiac arrest in the town of Hampstead.

Thousands of residents have been evacuated but with worsening weather conditions rescue efforts have been slowed and becoming more difficult.

Meteorologists have warned that the weather and conditions will get a lot worse, before getting any better.

Despite a weeks worth of warnings, the residents of Carolina are bracing themselves for more rain and flood water and strong winds.