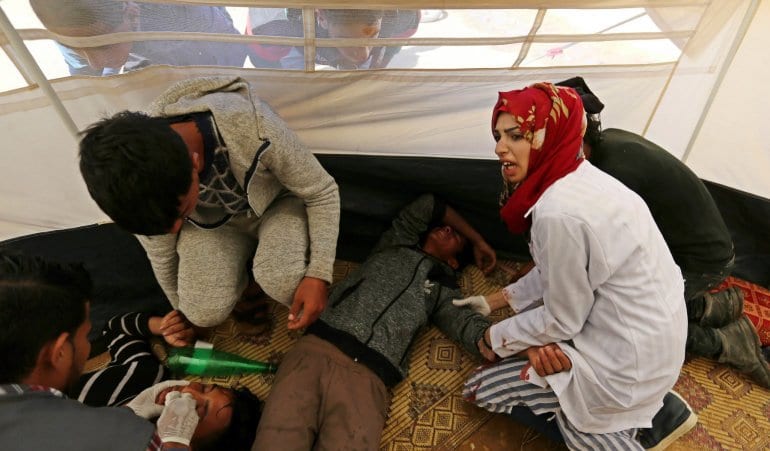 Could a #British passport holder have shot Razan al Najjar, the paramedic killed by a sniper in #Gaza?

The question over the identity of who killed heroic Palestinian paramedic Razan al-Najjar has become more pressing in recent days after it emerged that the Israeli sniper who shot the 21-year-old on June 1 could be a British passport holder.

There are many British Jews, both men and women, serving in the Israel Defence Forces (IDF) with dual nationality alongside others from overseas.

The identity of the soldier who pulled the trigger as he/she put Razan in their crosshairs, however, is being protected by the Israeli military pending an investigation into the death of the young volunteer paramedic from Gaza.

This latest turn of events coincides with a petition calling on the UK government to ban all British citizens, even if they have dual nationality, from joining and serving in the Israeli military, police or other security forces. The reason is simple; Israel tops the league of countries who regularly violate and ignore UN regulations and sanctions. It often faces accusations that its soldiers routinely commit acts which many lawyers and human rights groups deem to be war crimes and crimes against humanity.

Some of the charges made against Israel is that it is a state which tortures suspects in military detention, including children; deliberately bombs schools and hospitals; and routinely carries out the collective punishment of civilians, all of which violate international law. The organisers of the petition say that, “No UK citizens should be allowed to possibly contribute to further war crimes by serving in the Israeli military, police or security apparatus.”

A preliminary investigation by the military in Israel insists that its soldiers did not fire directly at Razan Al-Najjar while she was helping demonstrators injured during the Great March of Return protests on the Gaza border. At least 133 Palestinians have been killed since the protests began on March 30; almost 15,000 have been wounded. The death toll is expected to rise, as at least 366 of those taken to hospital are suffering from serious injuries.

The peaceful protests are demanding the implementation of the legitimate right of return for Palestinian refugees, who were forced to leave their villages, towns and cities during and since the 1948 Nakba. Protesters are also calling for the 11-year Israeli-led air, land and sea blockade of Gaza to be lifted.

The death of Razan al-Najjar sent shockwaves around the world, not least because she had become an instantly recognisable figure before she was shot dead. Mainstream media images of her were widespread, making her a personality easy to spot in her medic’s uniform.

Journalists from local and international media outlets interviewed her as an unarmed first responder helping those injured during the demonstrations. She was last caught on video with her hands in the air, wearing her readily identifiable medic’s jacket and moving through the conflict area.

“I’m here at the front line as a human shield and rescuer for the injured,” Razan told journalists in May. “Being a medic is not only a job for a man, it’s for women too.” She was keen to show that women can play an active role in Gaza.

“Women are often judged,” she explained, “but society has to accept us. If they don’t want to accept us by choice, they will be forced to accept us. Because we have more strength than any man.” Razan was clearly becoming a role model for other young women and her presence helping the victims of Israel’s deadly response to the peaceful protests also confounded critics who accuse the de facto Hamas government in Gaza of oppressing and sidelining women.

Now, pending the outcome of the military investigation, speculation is being fuelled that she was targeted deliberately by the IDF. It is a claim that the army denies, but the day before she was shot and killed the IDF tweeted this statement[link to tweet attached]: “Yesterday we saw 30,000 people; we arrived prepared and with precise reinforcements. Nothing was carried out uncontrolled; everything was accurate and measured, and we know where every bullet landed.”

Within 24 hours of that statement being made, Razan was dead. Outrage was universal and the tweet disappeared suddenly from the social networks. What are we to make of that? Did the IDF deliberately target the young medic? Equally important is the question of the identity and nationality of the soldier who killed her.

Born in a farming village east of the town of Khan Younis in the southern Gaza Strip, Razan Al-Najjar was the eldest of six children. Her family still live in an apartment owned by relatives in Khuza’a. She did not attend university, but instead completed two years’ paramedic training at the Nasser Hospital in Khan Younis and then volunteered her services with the Palestinian Medical Aid Society. Her father, Ashraf Al-Najjar, has been unemployed ever since his business was destroyed in an Israeli air strike during the 2014 military offensive against the people of Gaza. The last time that he saw his daughter was when she rose early to eat something before the start of the dawn to sunset Ramadan fast.

A tale of two women

He told AFP that he never expected that his daughter would be targeted while involved in her humanitarian work but it looks as if that is exactly what happened. Razan was less than 100 metres from the border fence bandaging a man struck by a tear gas canister when, say witnesses, Israeli soldiers fired from across the border. She was hit in the upper body and fell instantly.

The probe by the IDF is based primarily on interviews with soldiers who were on the scene. The investigation is said to be ongoing, and details have yet to be released about who opened fire during the protest on that day, and how much ammunition was used.

The IDF appeared to be intent on inflicting further pain on Ashraf Al-Najjar and his family. Not content with killing their daughter and sister Razan, there are those within the military who have also attempted to assassinate her character. Avichay Edraee, the Israeli army’s Arabic-language spokesman, released a video showing a paramedic from the back, possibly Razan, flinging away a smoke grenade that soldiers had thrown at her. Seizing on this, the IDF portrayed the young paramedic as a terrorist. Her aforementioned interview, in which she described herself as a “human shield”, was cited, but her words “and rescuer for the injured” were edited out.

This desperate propaganda move by the IDF was seized upon with outrage by Israeli newspaper columnist Gideon Levy: “An Israeli army investigation, based only on the testimony of the soldiers of course, showed that she had not been deliberately shot. Clearly. The propaganda machine went further and hinted that she may have been killed by Palestinian weapons fire, which has rarely been used over the past two months.” Maybe, he asked, she shot herself? “Anything is possible. And do we remember any Israeli army investigation showing otherwise? Israel’s ambassador in London, Mark Regev, who is another top, polished propagandist, was quick to tweet about the ‘medical volunteer’ in quotation marks, as if a Palestinian could be a medical volunteer. Instead, he wrote, her death is ‘yet another reminder of Hamas’ brutality’.”

Levy is a courageous commentator who says things that most Israelis would prefer not to hear, especially those in the upper echelons of the government and armed forces. Tackling Regev’s outrageous suggestion, he continued: “The Israeli army kills a medic in a white uniform, in an outrageous violation of international law, which provides protection for medical personnel in combat zones. And that’s despite the fact that the Gaza border does not constitute a combat zone. But it’s Hamas that is the brutal one.”

Addressing Regev directly, he said, “Kill me, Mr. Ambassador, but who could possibly follow this twisted, sick logic? And who would buy such cheap propaganda other than some of the members of the Board of Deputies of British Jews — the largest representative organisation of UK Jewry – along with Merav Ben Ari, the Knesset member who was quick to take advantage of the opportunity and state: ‘It turns out that the medic, yes that one, wasn’t just a medic, as you see.’ Yes, that one. As you see.”

Gideon Levy was not alone in his anger. Razan may be dead and buried but her story will continue to raise questions about the methods and tactics of the Israeli military for a long time to come, as well as the nationality of those who sign up to serve in the ranks of an army with a questionable record on war crimes and human rights violations. Should the petition attract the required number of signatures, MPs at Westminster will have to debate the issue of British citizens serving in the Israeli security forces.

“We know where every bullet landed,” claimed the IDF in that short-lived tweet. In that case, it shouldn’t be too difficult to identify who pulled the trigger and killed Razan Al-Najjar. How, I wonder, will British MPs — especially those “Friends of Israel” in the Labour and Conservative Parties — react if that person turns out to be a British passport holder?