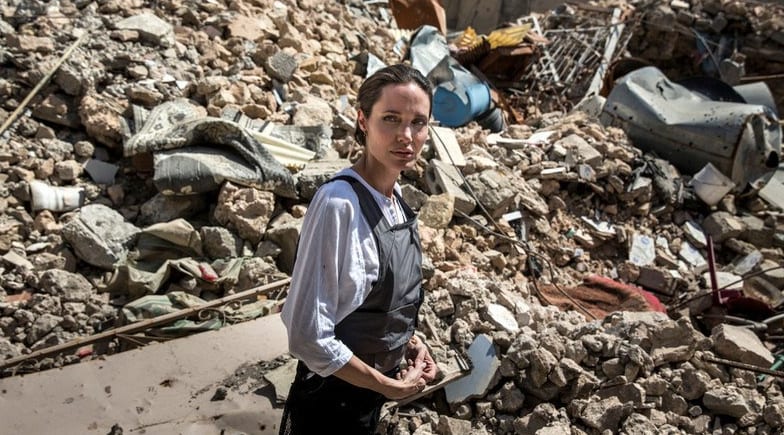 ‘You can smell the bodies’: #AngelinaJolie in #Mosul one year after ‘liberation’ by US-led coalition @Refugees #WtxNews

Angelina Jolie visited Mosul, Iraq, on Saturday to raise awareness of the dire humanitarian situation that plagues the city almost one year after its liberation from ISIS.

As a special envoy to the United Nations Refugee Agency, known as UNHCR, Jolie toured bombed-out streets and met with displaced families celebrating the second day of Eid al-Fitr, the Muslim holiday marking the end of Ramadan.

Mosul, Iraq’s second-largest city, was liberated by Iraqi forces in July, after three years of ISIS control. The nine-month battle to retake the ancient city left an estimated 10,000 people dead and much of the metropolis destroyed.

UNHCR envoy Angelina Jolie said the stench of dead bodies buried under the rubble was still present, amid the “worst devastation” she has ever seen.

“There are bodies in this rubble that stay here and you can smell the bodies and some of them have family members that are here and they are unable to move them,”

The Hollywood superstar and Special Envoy for the High Commissioner for Refugees (UNHCR) made her comments, after exploring a part of Mosul that was recaptured last year with the US-led coalition’s active support.

Even though this was Jolie’s fifth trip to Iraq, the horrific destruction she witnessed in the Old City this time really broke her heart. Walking around the narrow streets of the city centre, completely destroyed by artillery and airstrikes, the 43-year-old Oscar winner called it the “worst devastation” she saw in her 17 years representing the UNHCR across the globe.

Jolie urged the “international community not to forget Mosul and not to turn their attention away from its people” as they recover from years of suffering.

Jolie, an actress and filmmaker, is well known for her international activism. She represented UNHCR first as a goodwill ambassador from 2001 to 2012, travelling to dozens of global conflict zones to advocate for displaced populations. In April 2012, she was appointed as special envoy.

My Tweets
We use cookies to help identify your computer so we can tailor your user experience, track shopping basket contents and remember where you are in the order process. WTX News Our Cookie Policy
Men-only mosques invalidate jumma prayers
Celebrities, politicians, athletes extend Eid greetings from around the world
To Top
Weekly