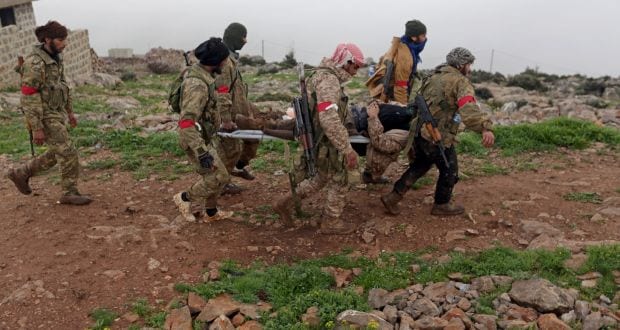 Operation Olive Branch, launched by the Turkish Armed Forces on January 20, 2018 with the objective to purge Afrin city and its surroundings in Northern Syria from the YPG/PKK and DAESH terrorists, achieved its goal on the 58th day of the operation. As of Sunday morning, March 18th, all terrorist elements were cleared from the Afrin city center and its villages, thus ensuring total control by the Turkish armed forces.

When the YPG/PKK terrorists sustained heavy losses in the skirmishes, the PKK commanders, who had been dispatched by Kandil to assist Afrin, fled the city and headed towards al-Raqqah and Manbij. Following the senior commanders’ flight, the rest of the terrorist militants quickly disbanded as well, joining in the collective escape.

Throughout Operation Olive Branch, a total of 4,000 terrorists were neutralized. The YPG/PKK, which had been brought forward as the USA’s so-called chief actor in the fight against DAESH with an allegedly undefeated streak in the region, turned out to be nothing but a big, over-inflated balloon. Specializing in areas such as terrorizing civilian populations, ethnic cleansing, extortion, looting, pillaging and smuggling rather than real military prowess, the terrorists of the YPG/PKK proved utterly impotent in the face of the Turkish army and FSA forces.

Right from the onset of the operation, certain Western media outlets reported various speculations regarding Operation Olive Branch, laying particular emphasis on the prospect of Turkey’s failure. However, the control of Afrin being wrested in such a short period of time followed by the purging of the city and its surroundings from all terrorist elements have disproved many analyses on the issue, and invalidated the arguments on how Afrin would turn into some sort of ‘Vietnam’ for Turkey.

For example, the Independent newspaper journalist Patrick Cockburn’s predictions on the YPG/PKK launching a powerful counterattack against the Turkish army in Afrin and Turkey’s eventual failure in the operation offered a brief glimpse of the Western media’s stance on the operation.

In response to the Turkish Army’s decisive and successful advance in the Afrin campaign, the said press this time has resorted to fake news and black propaganda. The false reports alleging that Turkey was targeting civilians, hitting hospitals, and perpetrating massacres and genocide began circulating in the same media organizations. Attempts were made to back this fake news by bogus interviews held with dubious individuals.

For example, the picture of a child injured in Aleppo in August 2016, similarly the footage belonging to the 2012 military exercise in Russia and the footage taken in a F16 belonging to the Dutch Air Forces, together with the doctored audio recording of a police chief from 2015, a picture of a torn body from an explosion that took place in Egypt in 2015 and even pictures from the video game  ‘Medal of Honor’ were all used to discredit the Afrin operation as part of this black propaganda effort.

In addition, a fire that broke out in Kuwait in 2017, a tank in the Gaza Strip in 2014, a picture that shows ‘a woman freezing to death’, who was actually a lady trying to cross the border into Lebanon on January 18, the picture of an injured child, which was taken in Mare, Syria on August 29, 2017, were all shown as if they were scenes from the Afrin operation, as clear examples of further disinformation attempts.  Furthermore, a picture that was spread with the claim of showing people fleeing from the Turkish operation turned out to be from 2016. Even more interestingly, the PYD showed on its social media accounts its own attack against two Turkish hospitals as an attack by Turks.

However, it is a well-known fact that it is actually the YPG/PKK who oppresses and perpetrates ethnic cleansing on the civilian population in the region, a fact attested by myriad witnesses and numerous relief and non-governmental organizations. Lawyer Fehid Musa, who carries out humanitarian diplomacy work in Syria, revealed that more than a thousand civilians were jailed by the YPG/PKK and that the group inflicts the heaviest torture on Kurdish dissidents. He also stated that he presented all the details of this oppression to the UN’s organizations, the delegations in Astana and the NGO’s, but has not had any results so far.

Moreover, the use of civilians as human shields to save their own lives, even forcefully relocating the civilians in the surrounding villages into the Afrin city center are some of the inhumane practices YPG/PKK resorted to during the Afrin campaign as also confirmed by the UN. In fact, Farhan Haq, one of the UN Secretary General’s spokespersons, noted in his statement on February 6 that the YPG/PKK was imposing a blockade on Afrin, not allowing civilians passage to safe areas. Lowcock, the Assistant Secretary General of the UN, said in his statement on February 28 that the terrorist organization was preventing civilians’ access to safer regions. On the other hand, by ensuring that the aid convoy sent by the Red Cross for 50 thousand civilians safely arrived at its destination, the TAF once again demonstrated its sensitivity for civilian life.

The testimonies from the local population of now terrorist-free Afrin further substantiate the YPG/PKK cruelty. Abdulmenan Muhammad remarks, “Life was hard in here. The organization would ask everyone for their children. After spending a year in a dungeon, I left for Turkey. I could return only after three years,” while Ismail Halil says, “The organization has been here for 5 years. They horribly mistreated the Arabs. But Turkey is here now.”

On the other hand, rather than mistreating the civilians, the Turkish army drew out the operation, which, normally could have been concluded without much effort, through a heavy artillery bombardment. To plan its advance in accordance with the measures taken to assure that no civilians are harmed. In other words, the Turkish armed forces did not follow the method of launching bombardments without any regard to civilian casualties to capture a city at all costs, as the US did in al-Raqqah, Tell Abyad, etc. …

It is for this reason that the Turkish army and the accompanying FSA forces were welcomed into Afrin with demonstrations of affection and joy. The civilians of Afrin greeted the troops with the sounds of ululations. Cemal Hemo, one of the civilians who ran to greet the Turkish soldiers and the FSA members, expressed his joy, saying, “Where have you been for the last 6 years? Why did you leave us alone? Thank God, we are finally saved today.”

In the end, Operation Olive Branch was carried out in a manner that reflects the moral values, customs, traditions, superior conscience, and guiding principles of the Turkish nation and the Turkish army. With great consideration for the safety and security of all innocent civilians, women, children and the elderly alike.

The operation was brought to a successful conclusion by solely targeting the terrorists and their positions, hideouts, supplies and equipment. The disinformation and black propaganda efforts made by the YPG/PKK and certain media outlets supporting this terrorist organisation as a part of their propaganda operation utterly lack any sound, factual basis.