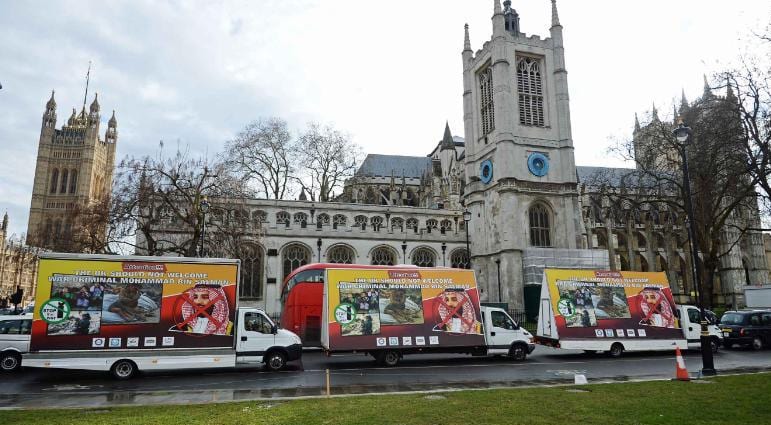 PM May, who visited Saudi Arabia in November, will be keen to capitalise on the Crown Prince’s visit to strengthen trade and security ties ahead of Britain’s departure from the European Union.

The 32-year-old Crown Prince, who is first in line to inherit the throne from his 82-year-old father, King Salman, is being given the red carpet treatment while in the British capital, on what is his first major overseas trip since assuming the role last June.

He had a private audience with Queen Elizabeth II on Wednesday morning before meeting at Downing Street with UK Prime Minster Theresa May and dining with Prince Charles and Prince William.

Flag-waving supporters cheered outside Buckingham Palace as the Saudi motorcade arrived. However, the Crown Prince will also face protests by human rights campaigners outside Downing Street over Saudi Arabia’s role in the war in Yemen, in which thousands of civilians have died while millions more are afflicted by acute malnutrition and cholera.

But critics say the British government is turning a blind eye to human rights abuses in Saudi Arabia and the ongoing war in Yemen.

The trip, which also includes stops in Egypt and the United States, is seen as part of an effort by the Crown Prince — considered a key power player behind the King and a reformer by Saudi standards — to “rebrand” Saudi Arabia and show its openness to change. It has been accompanied by a major Saudi PR drive in which his image has been projected onto billboards in London; protesters have responded in kind.

He and his delegation will also seek to reassure international business leaders rattled by the Crown Prince’s recent anti-corruption sweep, in which about 200 people — including business executives, officials and at least 17 princes — were arrested last year.

In this trip Mohammed bin Salman’s to the UK, aimed at developing security and economic ties and  between the two countries.