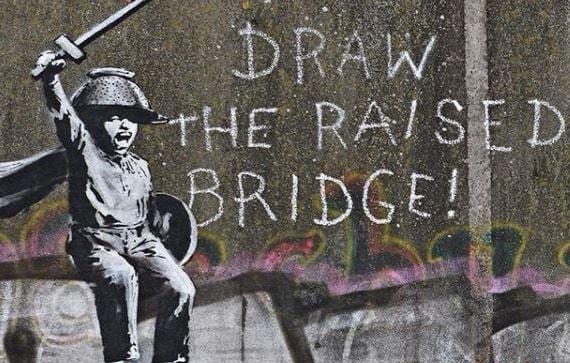 The Week So Far (TWSF) With Yvonne Ridley – In this weeks edition, Putin & Hogwarts, Beckham & his man-bun and the Dithering Prime Minister

The Week So Far (TWSF) with Yvonne Ridley opens with Vladimir Putin, a look at the chaos in Afghanistan and a special mention one of our favourite artists Banksy

I’ve never quite understood the call to boycott elections especially from those countries in the grip of authoritarian leaders … surely it is playing right in to their hands?

It’s a call that has been made by Russian opposition leader Alexei Navalny who was arrested for a few hours on Sunday by police at a Moscow rally in support of a presidential election boycott.

He was released without charge but has been summoned to appear in court at a later date where he may face charges. Navainy is already barred from standing in the March 18 election. Undeterred, and seemingly fearless, he has urged thousands to protest across Russia’s major towns and cities.

It’s obvious Putin is rattled by Navainy and his supporters though as the Russian leader has gone all Hogwarts and Harry Potter by refusing to mention Navalny adopting a “He-Who-Must-Not-Be-Named” position.

I can’t imagine the misery and heartache in Kabul today over the latest car bomb attack on the war torn Afghan capital where 100 innocents were killed and 235 wounded. Today, for some relatives, the tragic search to find and identify their loved ones continues.

The attackers packed an ambulance with explosives before driving past a police checkpoint to reach a crowded street in a district full of government buildings and embassies.

Coming hard on the heels of an audacious attack on a hotel in the Afghan capital in which 22 people were killed, some serious questions must now be asked about future strategies for Afghanistan which has been in the grip of war and conflict since October 2001.

The Taliban has claimed responsibility for Saturday’s assault, the third major attack in the past week while a spokesman for the interior ministry accused the Taliban-affiliated Haqqani network, which has been behind many of the biggest strikes on civilian targets in Afghanistan i the last year.

Dithering Prime Minister Theresa May was praised by US President Donald Trump who drew parallels with the British leader and Sir Winston Churchill, it emerged over the weekend … just as certain elements within her party were threatening a vote of no confidence.

May is coming under pressure from all corners of the Conservative Party to offer a clear vision of exactly what sort of Brexit deal Britain she has planned. According to Monday’s newspapers, Downing Street sources have confirmed that rather than rolling out her vision of Brexit in the spring, she will deliver a more limited speech in Germany at a conference next month in which her focus will be limited to security cooperation between European states.

As the pressure builds on the PM, hardline Brexiteers are determined she will push ahead with her promises to abandon the single market and the customs union. While she’s not showing a change of course she’s not willing to detail and outline her plans causing frustration from the Eurosceptics.

Leading the voices of dissent is former Northern Ireland minister Theresa Villier who used an article in the Sunday Telegraph to warn that Britain is in danger of falling into a soft Brexit which will mean remaining in the EU “in all but name”.

Rumours are rife in Westminster that senior civil servants, led by the chief negotiator, Ollie Robbins, have already offered a series of compromise deals to the EU negotiating team, including continued membership of the customs union.

It seems the Tory Party is revolting … but I knew that already!

On me head, Becks!

Thank goodness for that! I’m told style king David Beckham has shorn his locks and his man bun has gone. The trendsetter is frequently emulated in the hair department by a number of men of a certain age and while Alice bands and man buns might suit Beckham, the look did not sit well with most of his followers!

Still, I suppose we should be grateful that Beckham has always avoided the deadly combo of white socks and Jesus sandals!

It’s art John, but not as you know it!

The genius of street artist Banksy appears to have been lost on Hull Councillor John Abbott who is not at all impressed that the world-famous star has left his mark on a disused bridge in the former city of culture. While hundreds have visited the site to admire and wonder at his latest efforts, the local politician wonders why he can’t use a canvas like other artists instead of creating “graffiti.”

Tweet: Banksy’s a huge draw in Hull but not with city Councillor

The Week So Far (TWSF) With Yvonne Ridley – In this weeks edition, Putin & Hogwarts, Beckham & his man-bun and the Dithering Prime Minister