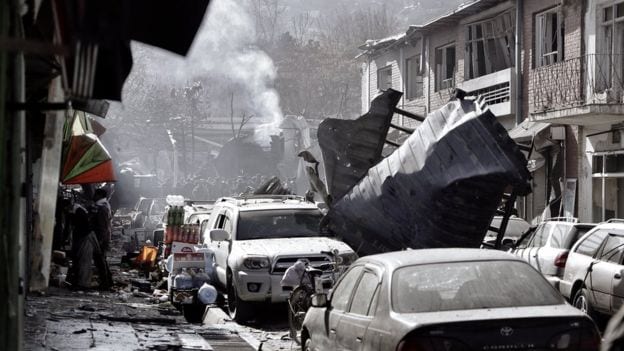 Ambulance Bomb 95 killed as ambulance blows up in Kabul

Breaking News: 95 killed and 158 wounded in a huge ambulance bomb in Kabul.

An ambulance packed with explosives blew up in a crowded area of Kabul on Saturday, killing at least 95 people and wounding 158 others, officials said, in an attack claimed by the Taliban.

The explosion is one of the biggest explosions in Afghanistan since a truck bomb ripped through the Afghan capital’s diplomatic quarter on May 31 last year, triggered chaotic scenes as terrified people fled the area where several high-profile organisations, including the European Union, have offices. Members of the EU delegation in Kabul were in their “safe room” and there were no casualties have been reported.

The Afghanistan Health ministry spokesman Waheed Majroh told AFP that the toll “now stands at 95 dead, 158 wounded”, and is expecting the death toll to rise further.

This is the second attack this week aimed at foreign organisations. Earlier this week the offices of Save The Children were attacked by ISIS.

Attackers drove an ambulance laden with explosives past a police checkpoint in a secure zone, home to government offices and foreign embassies.

The target is believed to have been an interior ministry building, but many people were hit while walking by.

The Taliban have claimed responsibility for the attack on social media, the deadliest for months and their second this week.

Nasrat Rahimi, deputy spokesperson for the Interior Ministry, said the attacker got through a security checkpoint after telling police he was taking a patient to nearby Jamhuriat hospital.

He detonated the bomb at a second checkpoint, said Mr Rahimi. The scene outside was one of chaos and destruction.

Civilians walked through debris-covered streets carrying wounded people on their backs as others loaded several bodies at a time into ambulances and private cars to take them to medical facilities around the city.

The explosion comes exactly a week after Taliban militants stormed a luxury hotel in Kabul, killing at least 22 people, the majority foreigners.

A security alert issued to foreigners on Saturday morning had warned that the militant Islamic State group, which has terrorised the city in recent months, was planning “to conduct aggressive attacks” on supermarkets, shops and hotels frequented by foreigners.

Ambulance Bomb 95 killed as ambulance blows up in Kabul