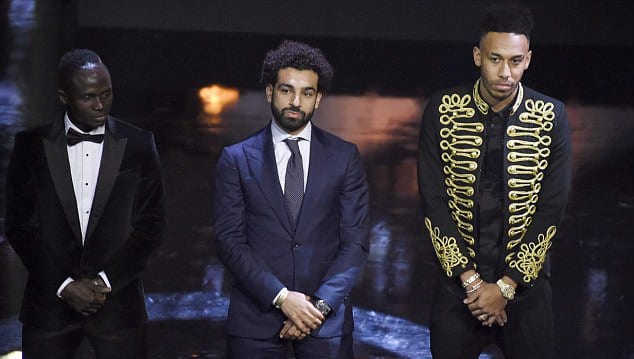 Mo Salah Wins the award for African player of the Year. Salah joins a long list of stars who have won the prestigious award, including Didier Drogba, George Weah, Roger Milla and Yaya Toure.

Liverpool forward Mohamed Salah has been named the 2017 Confederation of African Football Player of the Year.

The Muslim Egyptian playmaker Mohamed Salah etched his name into football history after being crowned African Player of the Year 2017.

The 25-year old, who plays for English side Liverpool picked the topmost prize at the Aiteo CAF Awards Gala 2017, held on Thursday, 4 January 2018, at the International Conference Centre in Accra, Ghana.

For the first time, a public vote was used to help decide the winner, with Salah securing 97.65% of the vote.

The 25-year old has scored 17 Premier League goals this season and helped Egypt reach the World Cup and Africa Cup of Nations final in 2017.

He finished ahead of Liverpool team-mate and Senegal winger Sadio Mane and Gabon striker Pierre-Eric Aubameyang.

Earlier rounds of voting for the award were decided by a mixture of Caf officials, independent journalists, national team coaches and captains, with the criteria for choosing a winner from the final three also including a public vote element.

Mane and Salah attended the ceremony in Ghana’s capital Accra, 24 hours before Friday’s FA Cup game against Everton, the latter ruled out with injury.

Salah fended off opposition from club-mate Sadio Mane of Senegal and Gabonese Pierre-Emerick Aubameyang, winner in 2015, to become the first Egyptian to win the most prestigious individual honour in African football. He polled 625 points, against 507 from Mane whilst Aubameyang finished a distant third with 311 points.

The feat capped a superb year for the forward who played an influential role for both club and country during the year under review.

Speaking about his Liverpool team-mate Mane, Salah suggested the Senegalese is on course to win the Player of the Year award himself in the future.

“I am very happy and very proud to share this moment with my friend, and I am sure he is going to win it very soon,” he said.

Liverpool FC pulled out all the stops by arranging for trip that would ensure both players could make the ceremony.

And to fly straight back to Liverpool by charter jet after Thursday’s ceremony, which finished at 2200 GMT. Liverpool play local rivals Everton in the FA Cup third round on Friday.