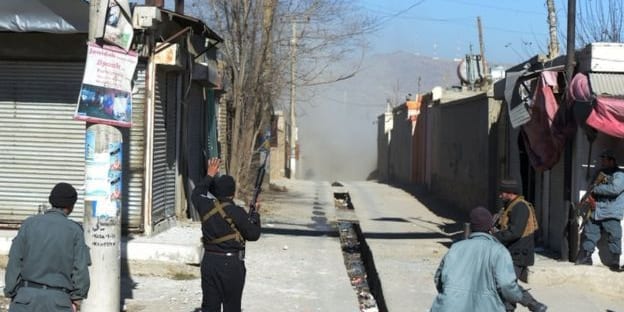 At least 40 people were killed Thursday in a suicide bomb attack in Afghanistan’s capital Kabul, according to authorities.

A Shia cultural and religious organisation and media offices of the Afghan Voice agency were hit.

A suicide blast was followed by another two explosions in the area. No-one has yet said they were behind the attack.In recent months, so-called Islamic State has been carrying out attacks on Shia targets across the country. Another 30 people were injured in the attack.

The Taliban denied responsibility for the attack in a statement to the media released by the group’s spokesman, Zabiullah Mojahid.

The initial explosion was followed by two others that appeared to target those trying to help victims. Images on social media showed a number of bodies in a courtyard following the blast.The explosion occurred in a basement meeting room of the Dashte Darchi cultural center in west Kabul.

A crowd of fewer than 100 people were meeting to commemorate the Soviet invasion of Afghanistan, Amiri said. The bomber infiltrated the crowd before detonating a device. The two other devices are thought to be IEDs, were also in the building and went off shortly after the first explosion.

Both the Afghan capital and the wider country are beset with attacks on its military, police and civilian populations. Earlier this week at least 10 people were killed after a suicide attacker detonated a bomb in an attack claimed by ISIS.