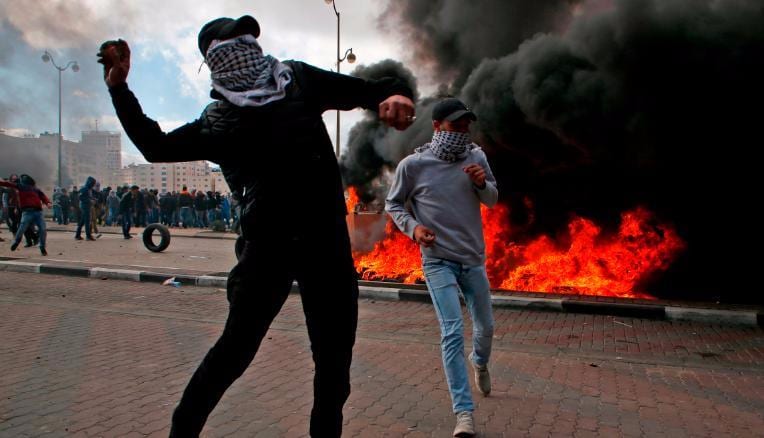 The World reacts as clashes break out in the West Bank, where Israeli officers fired what appeared to be rubber bullets, water cannon and tear gas at protesters.

Israeli airstrikes killed two unverified members of Hamas in Gaza. The two Palestinian deaths bring the number of fatalities in the past 48 hours to four. The Israeli army shot two Palestinians dead in Gaza on Friday.

The protests have been caused by Donald Trump’s decision to make good on his deal with The Israeli lobby to recognise and support the drive to recognise Jerusalem as the capital of Israel, before advancing towards peace talks.

The exchange of fire with Gaza is the latest outbreak of violence in the fallout from the decision by the US president to recognise Jerusalem as Israel’s capital. Most countries around the world have not recognised Israel’s 1967 annexation of East Jerusalem and maintain their embassies in Tel Aviv.

Analysts and the political commentators have suggested that this drive was initiated by Kushner, Trumps son in law. During the campaign trail to elect Trump. The agreement was made behind closed doors at a pivotal point in the campaign when it appeared Trump was losing the support of the Republican Party.

Israeli Prime Minister Benjamin Netanyahu addressed a conference of foreign diplomats in Jerusalem on Thursday, saying that other countries had begun pledging to also recognise the city as Israel’s capital.

“Welcome to Jerusalem, the capital of Israel, if you weren’t aware of it. We have been aware of this for 3,000 years,” he said at the event.

The international community, apart from the United States is united in saying recognition of Jerusalem as the capital of Israel is disastrous for any hopes of reviving meaningful talks. The status of Jerusalem is one of the pivotal issues that diplomats and peacemakers have said must be agreed between the two parties in negotiations.

Key US’ allies, including the UK and Australia, made clear they did not plan to follow Trump’s lead on the issue and warned about the fallout to come.

The British Prime minister made a statement expressing her dissatisfaction at the move and stated that the British Embassy would stay in Tel Aviv.

The most compelling of critiques for this move came form Turkeys President Erdogan – in the video below.

As well as Erdogan’s address, the Turkish Prime minister, Binali Yildrim said “It is a powerful blow to the Israeli-Palestinian peace process. This decision opened Pandora’s box in the region,”

The Pakistani foreign ministry expressed its “strong opposition and condemnation” of the announcement, in a statement on Wednesday.

“Pakistan shares the international outrage and is deeply concerned over the implications of this decision for international peace and security, especially in the Middle East. Pakistan calls upon the UN Security Council to take cognisance of this situation and take steps in accordance with the UN Charter,” the statement said.

The Iraqi foreign ministry summoned the US ambassador in order to present him with a memorandum “protesting the US president’s decision regarding Jerusalem.”

Jordanian Foreign Minister Ayman Safadi said the announcement marked a “dangerous decision” that would benefit radicals in the region.

And Malaysia’s foreign ministry called it a “miscarriage of justice … and Recognition of Jerusalem as the capital of Israel, ignores the reality on the ground, endorses Israel repressive policies, violates Palestinian human rights and contravenes international law. It is a miscarriage of justice.”

Palestinian officials see Trump’s actions as an opportunity to cut ties with what they see as increasingly biased US mediation and try to internationalise the issue.

The crisis has put renewed pressure on the risk-averse Palestinian President Mahmoud Abbas, who then ordered representatives in Washington DC to return home as he said the US had “withdrawn from its role in the peace process”.

In a scathing rebuke to Trump’s speech on Wednesday night, Mr Abbas insisted Jerusalem was the “eternal capital of the State of Palestine”.

Celtic Football supporters, who are regarded as one of the most intelligent and passionate group of supporters in Britain, led the way with protests during their game on Sunday and demonstrated their support for the Palestinian cause. In a truly remarkable demonstration of support by holding banners and Palestinian flags, proud and dignified.

Fans then launch a campaign to raised thousands of pounds for Palestine and handed over a cheque to charities in the country for £176,000.