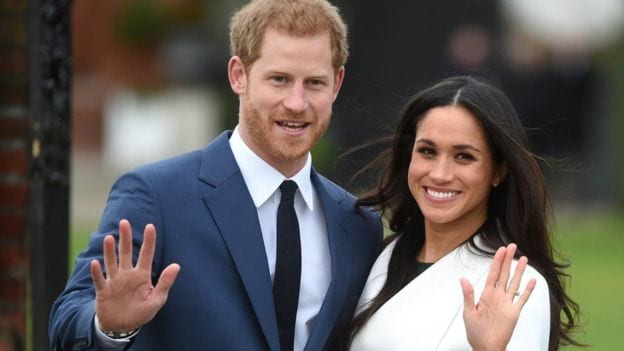 The announcement of their engagement was issued by Clarence House on Twitter, the Prince of Wales and Duchess of Cornwall’s official residence

The worst kept secret is out, as the Sunday papers expressed over the weekend, Prince Harry is engaged to his Hollywood sweetheart Meghan Markle, the star of the hit show ‘Suits’.

Prince Harry says he and US actress girlfriend Meghan Markle fell in love “so incredibly quickly” and it seemed proof that the “stars were aligned”.

The fifth in line to the throne was speaking after the couple announced their engagement and plans to marry in spring 2018.

Prince Harry said he was “thrilled”, while Ms Markle said she was “so very happy”.

Ms Markle, wearing a white belted coat, held Harry’s hand as they appeared briefly for the press at the palace’s Sunken Garden, and showed off her diamond engagement ring.

Ms Markle’s engagement ring was designed by Prince Harry and features two diamonds which belonged to his mother.

Asked by a reporter when he knew Suits star Ms Markle “was the one”, Prince Harry said: “The very first time we met”.

Prince Harry said he proposed earlier this month during a “standard, typical night for us” at his home in Kensington Palace as the couple were making roast chicken.

“It was just an amazing surprise. It was so sweet, and natural and very romantic,” Ms Markle said.

The announcement of their engagement was issued by Clarence House on Twitter, the Prince of Wales and Duchess of Cornwall’s official residence, and said details about the wedding day would be unveiled “in due course”.

The Prince of Wales is delighted to announce the engagement of Prince Harry to Ms. Meghan Markle. pic.twitter.com/zdaHR4mcY6