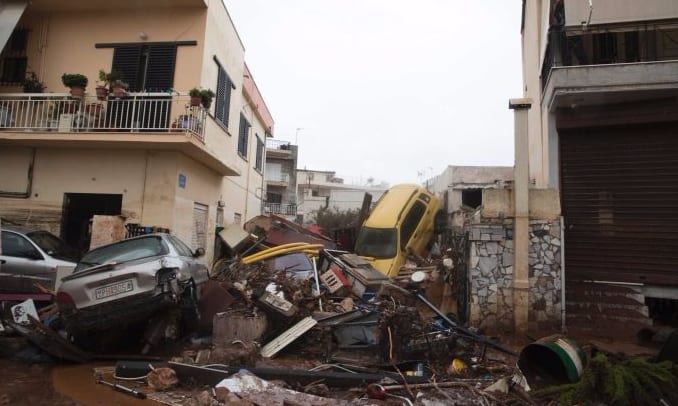 The search for survivors as flash flooding in Greece kills 15 – Death Toll could rise further as many are missing.

Flash floods caused by heavy overnight rain have killed at least 15 people and caused mass destruction in central Greece. At least 37 people have been taken to hospital and many are still missing.

The majority of the dead were elderly people whose bodies were found inside their homes, trapped in their homes as fast-flowing torrents of red mud flooded roads and battered their homes.

The industrial towns of Mandra, Nea Peramos and Megara, west of the capital Athens, were the most affected.

Prime Minister Alexis Tsipras declared a period of national mourning in the wake of the tragedy.

There were fears the death toll could rise further as rescue crews searched for potentially missing people in flooded homes and streets on the western outskirts of Athens.

The fire department said it had received more than 600 calls for help pumping water out of buildings and had rescued 86 people trapped in vehicles and homes — it said it had deployed 190 firefighters with 55 vehicles.

More hazardous weather was predicted for large swaths of Greece later on Wednesday (local time) and in coming days, with storms predicted for western Greece and for parts of the Greek capital.

The region’s deputy governor, Yiannis Vassileiou, told the broadcaster that emergency services had been prepared for poor weather, but then “the Niagara Falls came down and could not be stopped”.

The search continues for survivors.