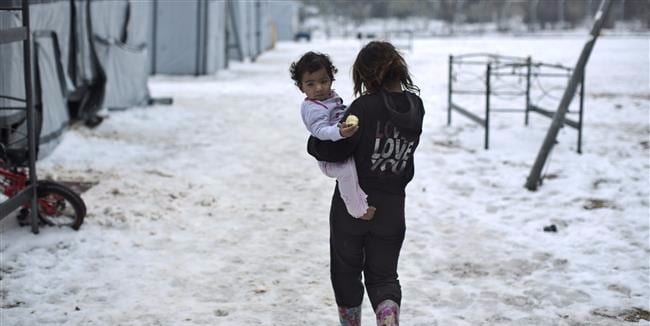 Not all refugees have the skills or training of John Rambo. But despite these odds, the dangers and the deteriorating living conditions Syrians risk making the trip.

The United Nations refugee agency (UNHCR) says that more than 25,000 refugees and migrants have taken dinghies and flimsy boats across the Aegean Sea from Turkey to the Greek islands this year. And more than a third of the arrivals were children, according to the agency’s statistics.

More than 4,000 refugees and migrants in Greece are in limbo, they have no where to go, separated from their loved ones and lacking clarity about when they will be reunited. This may not reflect the efforts of the countries that are accommodating the refugees, but as with any issue as it vanishes from our News-cycles it begins to disappears from our focus.

Aid agencies are preparing refugees for the harsh weather ahead, but a lack of funding means less relief. And that transition from a warm bed in house, to a rugged tent in a sleeping back becomes tougher than it already is.

According to the EU’s Dublin III Agreement, refugees are entitled to relocation and reunification with their families.

With winter approaching and the borders closed since March 2016, following an agreement between the European Union and Turkey to stem the flow of refugees, conditions in the refugee camps have worsened by the day.

Statements of ISIS defeat are far from true, The fighting in Syria hasn’t stopped, hasn’t slowed down, it has simply moved form the major cities. In fact it has become worse, moving into a guerrilla warfare against a ‘resilience army’ with so many political influences increases the risk to Syrian nationals.

Winter weather has a devastating effect on displaced Syrians since the country’s civil war began. Visions of Snow blanketed refugee camps across the region in previous years, and frigid temperatures created concerns about the health of refugees, who lacked access to warm clothing and secure shelter.

More than 60,000 refugees and migrants stuck in Greece. Unable to move on or start a new life makes them vulnerable to the smugglers, who promise relocation programs and a dream of Utopia on the streets of Europe. That often leads to a stretch of lengthy kamikaze hitch-hiking and when they do reach the ‘promised land’ it turns into modern slavery and or variations of human trafficking.

Refugees and migrants are human beings, part of families and grown up in communities that they have left behind. Instead they embark on a journey, ill-equipped for the terrain it brings. Not all refugees have the skills or training of John Rambo. But despite these odds, the dangers and the deteriorating living conditions Syrians risk making the trip.

The hardships of daily life in many refugee camps have been amplified by a recent surge in arrivals from Turkey, according to humanitarian organisations.

Over four million Syrians have been forced to flee their homeland and as a result of the brutal and continually escalating civil war. While hundreds of thousands of these refugees attempted to reach Europe this year, the vast majority remain in neighbouring countries like Turkey, Jordan and Lebanon. And only 12 percent of them are in official camps, the rest are at the peril of capitalism.

The weather has already started to take a turn in some parts of the region, and aid  assistance or vouchers for necessities such as fuel, more needs to be done keep out the cold and maybe, bring a smile to an orphans face.