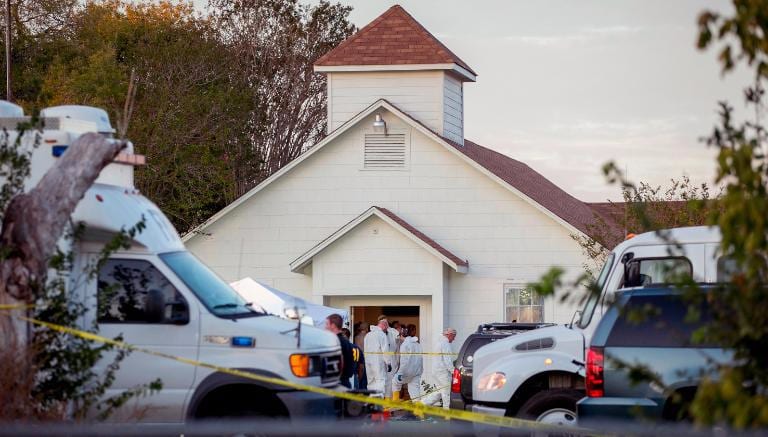 Breaking News From Texas: As the shooter, Kelly left the church, he exchanged fire with a local resident, who then used his own rifle to engage him.

Another horrible attack has taken place in the United States, where at least 26 people have been killed and 20 others wounded after a gunman opened fire at a Texas church during Sunday service.

The attack happened at the First Baptist Church in Sutherland Springs, a small town in Wilson County. The victims’ ages ranged from five to 72.

Police identified him only as a “young, white male”, The suspected shooter has been named as 26-year-old Devin Patrick Kelley. A discharged US Air force Soldier.  Kelley was court-martialed in 2012 for assault on his spouse and assault on their child.  And served a year in prison and received a bad conduct discharge in 2014

Authorities have not said what may have motivated the suspected shooter, who was later found dead in his vehicle.

It was all hands on deck as the FBI was on the scene of the shooting, Agents from the San Antonio field office of the Bureau of Alcohol, Tobacco, Firearms and Explosives also headed to the scene.

A peaceful town with no history of trouble. According to the church’s website, congregants meet around 9:15 a.m. on Sundays for breakfast before Sunday school and the morning church service at 11 a.m.

How the Shooting Unfolded

After the shooting, about 100 family members of victims gathered in a community centre next to the church, waiting for news of their loved ones.

The suspect was seen in a Petrol (Gas) station across the street from the church in Sutherland Springs at about 11:20 a.m. local time on Sunday morning. The suspect left the Petrol station, crossed the quiet street, dressed in Army tactical gear, loaded his gun and began firing indiscriminately leading up to the church and then he entered the church. Where he killed and injured the majority of his victims. The gunman run into the church building and as an eyewitness describes ‘he heard shots and saw people running’.

As the shooter, Kelly left the church, he exchanged fire with a local resident, who then used his own rifle to engage him. The shooter then fled the church, while the citizen continued to pursue him.

The shooter was killed after a brief chase north into neighbouring Guadalupe County. A law enforcement later found the suspect dead of a gunshot wound inside his vehicle. And it has not been confirmed who killed the home grown Terrorist, Devin Patrick Kelly.

A Community left in ruins

After the shooting, and as police presence intensified at least a 100 family members of victims gathered in a community centre next to the church, waiting for news of their loved ones. Others later joined holding vigils and holding hands whilst praying for the victims.

Local community leaders and pastors from other churches also arrived on the scene to help console and support the victims and community.

Local hospitals are treating the victims with priority care and have advised that most of the injured are stable except one, who remains in critical condition.

President Trump tweeted whilst on his Asia trip.

May God be w/ the people of Sutherland Springs, Texas. The FBI & law enforcement are on the scene. I am monitoring the situation from Japan.

And later released this statement.

…Americans do what we do best: we pull together. We join hands. We lock arms and through the tears and the sadness, we stand strong… pic.twitter.com/qkCPgtKGkA

Questions will be asked again about the countries relaxed gun laws, following the second shooting in as many months in the United States, with the country still reeling from the Las Vegas shootings. And quite a few commentators have noted that they are looking to see if the President treats this shooting with same severity he did with New York attacker.