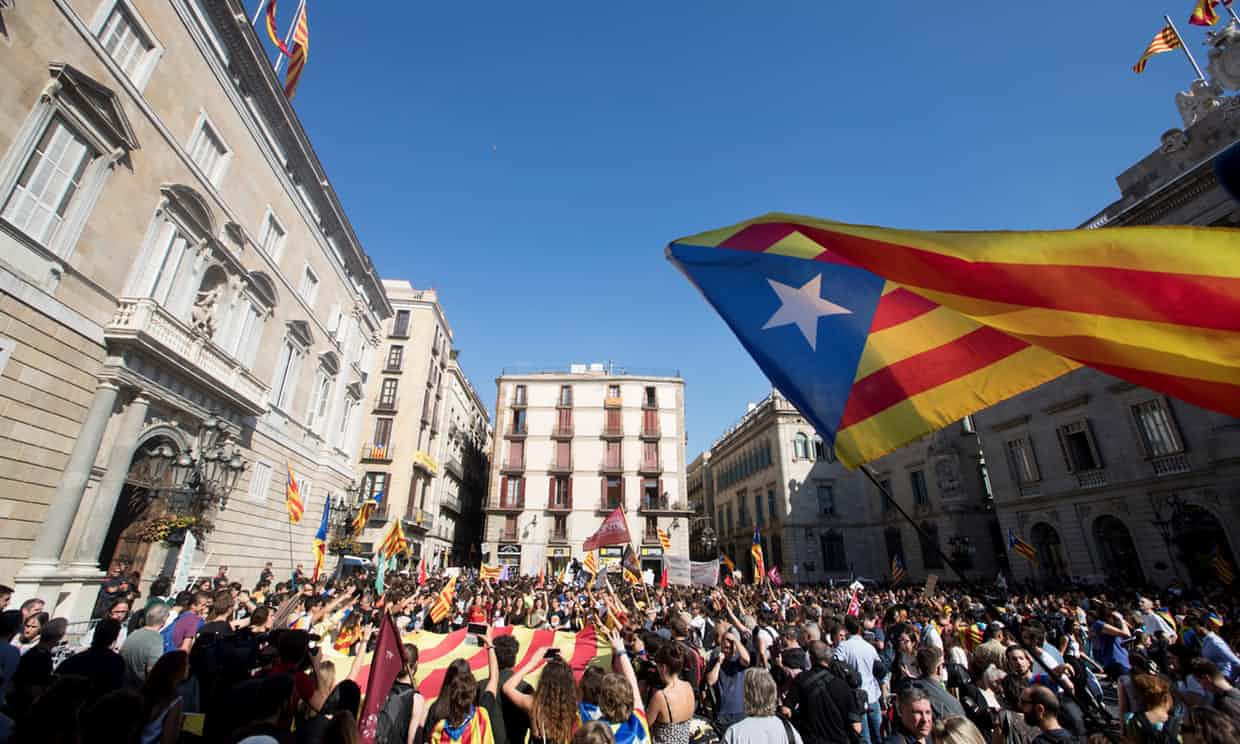 So Catalonia’s leader has ruled out early elections. I’m glad someone in Spain is trying to find a way to resolve the crisis over the regional government’s drive for independence.

Speaking in Barcelona, Carles Puigdemont said it was up to the regional parliament to decide as the bungling Spanish government threatened to strip Mr Puigdemont of his powers and curtail parliament’s functions. Article 155 of the Spanish constitution lets Madrid take control of institutions, police and finances in an emergency.

Mr Puigdemont declared independence after a referendum on October 1, which was ruled illegal by Spain’s constitutional court. But the Catalan leader immediately suspended implementation, calling for talks.

I hope the Spanish government realises this is not going to go away and after the disgraceful scenes of State violence meted out on ordinary Catalonians, I further hope Spain will resolve a peaceful solution and act like a European democracy and not some tinpot dictatorship. Franco’s days have long gone, surely?

Boys and their toys!

This must be a man thang! Why else would there be such excitement over the Bloodhound supersonic car aiming to break the world land speed record – and be the first to reach 1,000mph. It has already been tested at Newquay airport at speeds of up to 200mph. Just what we need in a country where the speed limit on motorways is 70mph!

JFK files released – unfortunately not all of them

The big news of the week so far is the anticipation and build up to the release of the JFK files. However, it does seem like we will have to wait a bit longer to see the full and complete release of the archived files surrounding the assassination of JFK.

President Donald Trump on Thursday agreed not to release the full tranche of records relating to the assassination of President John F. Kennedy. Did we expect anything else!?

I’m not sure who stands where on the issue of LBGTI asylum seekers in Parliament but what should concern every one of us is that the British Government appears to be persecuting this minority by deporting them to homophobic countries with the advice to “act straight” on arrival.

Theresa May’s Government has been exposed by the SNP MP Joanna Cherry who used this week’s prime Minister’s Questions to ask why the Home Office was telling gays from countries like Afghanistan, Iran and Cameroon to deny their lifestyle choice when arriving back home.

Cherry called on the PM to offer assurances this would never happen again adding: “We can all agree that no one should ever be persecuted on account of their sexuality. Last week, at the Pink News awards, the Prime Minister said that we had come a long way on LGBT+ rights, but there is still much more to do. Can I ask her to start that remaining work today by promising that never again will the Home Office deport LGBT asylum seekers to countries where they are likely to be persecuted with the instruction that they ‘pretend to be straight’.”

May typically obfuscated while saying the Home Office treated cases with “the sensitivity that is appropriate” but still failed to answer Cherry’s question directly. You can read and see the video recording in the Huffington Post here: http://www.huffingtonpost.co.uk/entry/lgbti-asylum-seekers_uk_59f07fdde4b0abb85a8edfcd?49

May be the Pink News should put the PM on the spot and ask her again to clarify her position before inviting her back to their annual event and awards night.

I’m in Johannesburg for a few days and on Wednesday night I put on a posh frock and joined the great and the good for the Minara Business Recognition Awards for Muslims attended by a sprinkling of government ministers, entrepreneurs and some of South Africa’s business titans. Among the glittering prizes at the event was a Lifetime Achievement award given to poet and author Dr Muhammad Ummarudin Mattera.

Like most octogenarians, Don, as he is affectionately known, is not easily impressed and after listening to the accolades, tributes and a history of his achievements as an anti-apartheid activist who led the politics of ‘Black Consciousness’ in the 1970’s, he scanned the banqueting suite before berating the audience.

“Not one of you has mentioned the 30 million homeless in South Africa who sleep on the streets,” he chided. Well we have now, Don! Thank you for the reminder.

I came across this anniversary on Monday. It never fails to shock me. On this day, October 17 in 1961 the French police massacred 300 Algerians in Paris. Their crime? Demonstrating for independence from France.

Too little to late, Mr Blair

Former British Prime Minister Tony Blair has at last admitted he was wrong … however if you thought he was about to apologise for mistakes he made over Iraq you’d be wrong.

His long overdue admission was that he and other world leaders were wrong to submit to Israeli pressure to impose an immediate boycott in Gaza after Palestinians democratically elected Hamas to power in the 2006 elections.

The decision by Blair and US President George W Bush to halt aid and then cut off relations with the newly elected Hamas-led Palestinian Authority has, over the years, caused untold hardship and misery for the Palestinians living in Gaza.

Your support is vital in helping us do the most important journalism of all: where we dissect through the propaganda, the fake news and other stories to bring you the best and most reliable source of news briefing. Support our independence, invest in our quality and champion our investigative journalism.