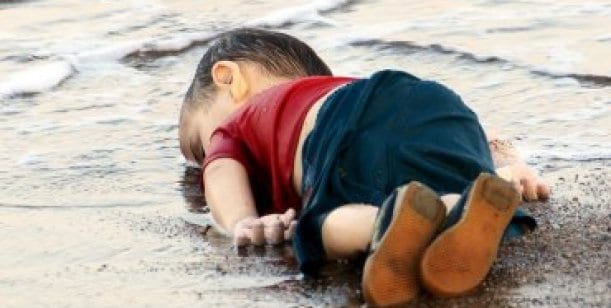 Syria is now in its fifth year of a murderous civil war. But the world should never forget this image and it should haunt everyone as an example for the failure of the worlds response to innocence.

Syria’s conflict broke out in March 2011 with peaceful protests against President Bashar al-Assad’s government but has evolved into a complex war involving jihadist groups and regional and international powers. More than half Syria’s population displaced in the conflict.

Syria is now in its fifth year of a murderous civil war. After the initial uprising of mostly secular activists that was put down with great brutality by Bashar al-Assad’s security forces, the civil war has attracted neighbouring states and Islamist groups like a festering wound pulls in flies. Initially, Saudi Arabia, Turkey, Qatar and the United States supported the mostly Sunni groups that had coalesced to topple the government that was dominated by the Alawites.

Yet despite the desperation and mediocrity of IS it has managed to hold off a sustained attack from Russia and the Assad regime and the United States and its allies. Meanwhile data from the UNHCR suggests that over 3 million refugees have fled to Turkey, and hundreds of thousands to other parts of the world. Turkey has become home to the biggest number of refugees in the world.

In retrospect, Turkey’s welcoming of Syrian refugees is an almost unparalleled act of human decency, and one for which the Turkish government and citizens derives much credit. But the truth is that the eventual scale and magnitude of the Syrian refugee crisis caught officials in Ankara by surprise.

Although, Turkey has been a staunch critic of Mr Assad since the start of the uprising in Syria. President Recep Tayyip Erdogan has said it was impossible for Syrians to “accept a dictator who has led to the deaths of up to 350,000 people”.

But perhaps the most significant moment of this entire crisis came in 2015 when a 3 year old washed up to the shores of a Turkish beach.

The world should never forget this image, etch it into your memories and allow to haunt you as an example of the failure of Humanity. Even as I am writing the horror of this image is unnerving.

Should the West continue to wage an altogether unsuccessful campaign that has resulted in the mass migration of refugees into Europe and the creation of a wasteland of cities, the destruction of which will be with us for generations to come. But being controlled by an unchallenged ruthless terror organisation set on committing atrocities on a global scale, is just unacceptable.

However, there is a moral, if not legal, duty to provide protection. Ankara has to accept and protect all Syrians fleeing the war-torn country and figure out how it will provide, educate these people and find jobs for them.

Turkey cannot resolve this humanitarian crisis alone and it is essential for Europe and the United States to carry its share of the burden.

Recent developments in Syria were only making the refugees’ situation in Turkey worse and many Syrians now believe that the only future they can have is in Europe, while others have started to accept that Turkey may be their final destination.